Bootable Linux SD card images for some Rockchip RK3188 devices such as MINIX NEO X7, MK809III, Tronsmart T428 have already been released this summer, and it provided any easy way to try Linux on Rockchip RK3188 devices without messing with your Android installation. But now you can create Android bootable images with any Rockchip RK3188 devices thanks to create-android-sdcard script written by Ian Morrison, as long as you have the firmware for your Android mini PC, and I don’t see why it would not even work for tablets. It allows you to try Android firmwwre before replacing your existing installation (great for developers), and it can also be a way to handle multiple users on a single device. There could be one SD card for dad, one for mum, and one for the kid, and all you have to do is to take out and replace the SD card with your own each time you want to use the device. 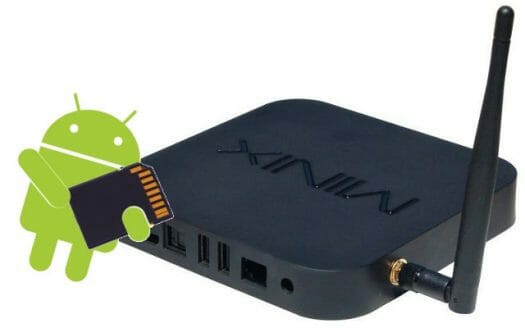 Ian provided instructions for Radxa Rock development board, but all RK3188 devices should work, simply replace Radxa firmware by your device firmware in the instructions below:

Please note that the first boot may be very slow, even you have a fast SD card. Next time, Android should boot relatively fast.

The script has only be tested on a few devices, so you may want to try it out on yours. It’s completely safe, and the worst case should be that you can’t boot from SD card, then simply remove it, and it will boot normally to the Android firmware installed in the internal flash. Android 4.4 firmwares should also work fine, but Android 4.2 may be more problematic due to different handling of the internal storage.

In case you wonder whether this is also possible with Rockchip RK3288, I’m currently testing Open Hour Chameleon, which exclusively boots from SD card (Android or Linux) since there’s no internal storage at all, so the script could eventually be updated to support RK3288, once the SD card boot procedure for the new Rockchip processor is discovered.

Great work, I have similar thing for Amlogic devices in my TODO list. However, what bothers me is that this thing is hosted on random locations on the net, like plus.google.com, drive.google.com, etc. This should be hosted in a git repo with easy ability to fork around.

create-android-sdcard may be good for all skilled developers who cannot write shell script.
but all source of information except that script is hidden, it is not for open source community.

Boot from SD on RK3288 is already confirmed by same person who made rkutils and sdboot_rk3188.img(independent to the product which does SD boot), but you may not be able to find information because source is hidden from this article.

Of course, original source is opened in open source community.﻿

@Jean-Luc Aufranc (CNXSoft) IanMORRISON wrote (on his G+ page): I’ve updated the included ‘Tools’ directory to include a ‘README.txt’ which contains the links to the source code for each tool and a link to the binary blob for ‘mkkrnlimg’ together with the required copyright notice, conditions and disclaimer.﻿ and also that the 3288 SD boot loader is avail at http://androtab.info/rockchip/u-boot/, with the following caveat “however note the caveat that the eMMC bootloader takes precedence and that it needs to be erased to boot from SD card.﻿” How to erase the eMMC is left as an exercise for the reader 🙂… Read more »

Did you create a script for creating bootable SDCards for AMLogic?
I would like to boot linux from an SDCard on an Ainol Novo 7 Tornados

Hello! I have a Firefly RK3288 that only initializes by sdcard and I would like to still use this motherboard and for this I need an android 6 TV image for the sdcard. I can buy if someone has this image to sell. [email protected]