Cloud Media (previously Syabas) recently announced Open Hour Chameleon Android media player powered by Rockchip RK3288 processor. Compared to the many competing solutions based on Rockchip’s quad core Cortex A12/A17 processor, Open Hour comes with a metallic case to provide better casing, and instead of coming with internal NAND or eMMC flash, they provide a bootable SD card (Class 10) pre-loaded with Android 4.4.2, and they also have a preliminary Lubuntu image. They also recommend to use SPMC for video playback as “going forward, Rockchip will fully support SPMC instead of their custom Kodi”. Before writing the full review, I’ll show some pictures of the device, and take it apart to check out the hardware and their thermal dissipation solution.

I’ve received the box by Fedex in the following package. 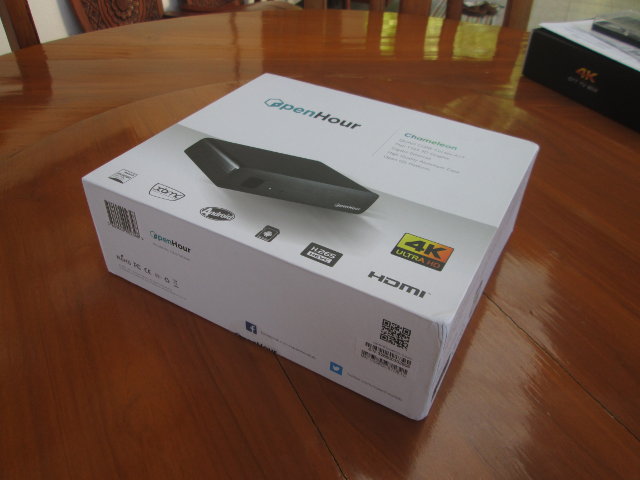 They list the key features on the top of the box namely RK3288, XBMC,  Android Kitkat, H.265/HEVC codec, and 4K UHD support. On the bottom of the package, the specifications are listed in several European languages, and they have hidden 2.0 in HMDI 2.0, which probably means the box only supports HDMI 1.4 (up to 4K 30 Hz), but it’s not something I’ll b able to test since I don’t own a 4K UHD TV.

The device comes with an Infrared remote control with IR learning function, two AAA batteries for the remote, a 8GB class 10 SD card pre-loaded with Android 4.4, an HDMI cable, a 5V/2A power supply, a quick start guide, and a warranty card. The quick start guide lists the content of the box, links to the box’ Wiki, Forum, and Support, explains that you must connect the box to your HDMI TV (doh!), shows how to use the IR remote control learning function so that you can use it with both the box and your TV. [Update: the final quick start guide will be different]

The box is entirely made of aluminum, and comes with two LEDs and the IR receiver window at the front, an SD card slot (for OS), and a USB 2.0 host port on one side, with most ports being available at the back of the enclosure: an optical S/PDIF output, a seldom found coaxial S/PDIF output, a Gigabit Ethernet port, an USB 2.0 port, a micro USB OTG port, a micro SD slot, HDMI output, yet another USB 2.0 host port, an On/Off switch, and the power jack.

If you prefer watching an unboxing video, here it is…

Contrary to other boxes, you need to use a “standard” screwdriver, i.e. not a precision screwdriver, to open the box,. There are four screws on the bottom of the enclosure, and two on the rear panel. After you’ve removed the first four screws, you can slide the bottom panel.

The only noticeable item on the bottom of the PCB is the micro SD slot. There’s also a sticker with the MAC address, which starts with 00:06:DC which belongs to … Syabas. So it looks like Cloud Media (Syabas) is indeed which has designed the box, and it’s not one of these companies that take a design from a company, re-brand it, and (sometimes) provide some extra support.Let’s untighten the four screws holding the board, and take out the rear panel. But when I try to pull the board out of the box, I feel some resistance. 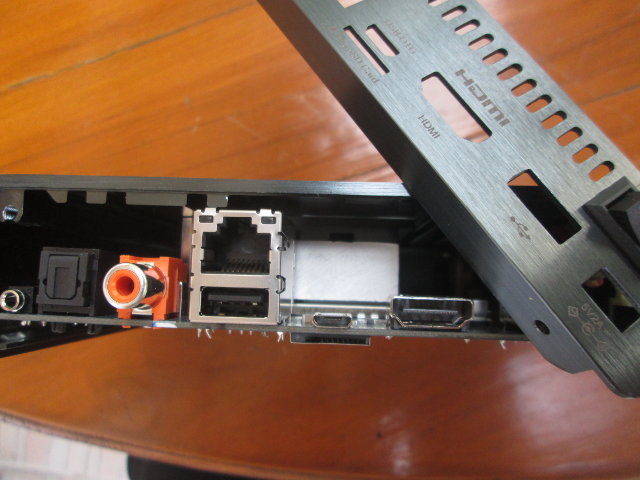 I can finally take the board out by pulling a little stronger. You can clearly see the aluminum heatsink screwed to the metallic enclosure, and a thermal pad between the heatsink, and a metallic shield use to dissipate heat and maybe? for EMC purposes. I’ve taken the shield out gently with a precision screwdriver, but you’d really better avoid doing this, or do it with plastic parts.

The board is named OPENHOUR_3288_V1.1, so it has definitely been designed by Cloud Media, or at least for the company, and manufactured/designed on 2014/09/15. You’ll also notice the thermal pads on top of the shield to provide thermal conductivity with Rockchip RK3288 SoC, and the four DDR3 chips (SK Hynix H5TQ4G63AFR) providing 2GB RAM. The serial pins (GTR) are available between the IR receiver and LEDs on the bottom left of the board. The board can support eMMC flash, but the company chose instead to boot the device from an SD card. There’s also some unpopulated zones on the left of the board, but I’m not sure what these may be for. The PMIC is Active Semi 8846QM, the Gigabit Ethernet transceiver is a Realtek one, but I forgot to note the part number. There’s no Wi-Fi/Bt module, so if you want Wi-Fi or Bluetooth you’ll need to use a wireless USB dongle.

That’s all for today. I’ll write the review with Android in a few days or next week, and I’ll probably give a try at there Lubuntu image too in a separate post.

Open Hour Chameleon is available for $149 on Cloud Media Store. Shipping is scheduled for December 5, 2014, but it’s actually their 7th batch, so quite a few Chameleons have already been shipped. I could also find it on Ebay, and if you live in German it’s listed on Amazon DE for 159 Euros. Cloud Media also sells a Wi-Fi/Bluetooth module for $21.90.