2015 will clearly be the year of 64-bit ARM processors, and one more company has now announced yet another ARMv8 SoC. Action Semi ATM9009 features four Cortex A53 cores coupled with an Imagination Technologies PowerVR GPU and targets entry-level and mid-range tablets and TV boxes, and certainly not high-end products as per the press release. 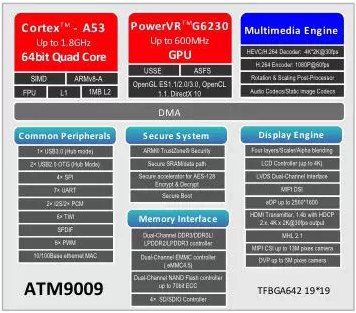 The key features of ATM9009 include:

The processor will run Android 5.0 at first. It’s unclear when products based on ATM9009 will become available, except it’s sometimes in 2015.

I don’t know if everyone and their grandma does the same, but I keep a spreadsheet to help me track the SoC zoo: https://docs.google.com/spreadsheets/d/1GT7I4P8MDlfYvRaL9Wv0NplQJryl54pO_6-9P3g7Fvk/edit#gid=0 . Maybe it’ll be helpful for someone else too. Pull requests welcome.

And lot of info there comes from this blog, thanks CNX!

@Paul
very nice and helpful thanks for sharing dude

Small mistake but big difference, OpenGL should be OpenCL.

@The Cageybee
Thanks for spotting my mistake.

PowerVR G6430 used in Google Nexus Player by Asus is only $99 coming with a 1.8GHz Quad-Core 64-bit Intel CPU and therefor should be better then the less powerful PowerVR G6430, so yeah they can not call this “for high-end products”.

Downside with Google Nexus Player by Asus is the lack of HEVC/H.265 video decoding and no Ethernet port.