Rockchip is also at CES 2015, and they’ve announced and are showcasing a new octa-core processor called RK3368 with eight 64-bit ARM Cortex A53 cores that will go into tablets and 4K UHD media players in the coming year. Most news outlet and blogs at CES only cover big brand, so all I got are a few tweets from Rockchip twitter account. 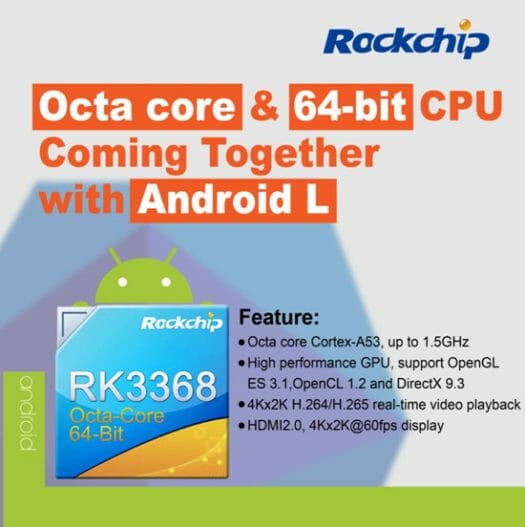 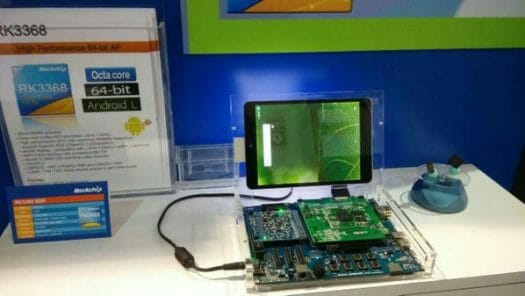 and what happens to rk3288? probably drop suppprt like they did with otheers. wat about linux drivers? we never saw them…

My prediction on the unknown gpu is PowerVR as in A80 from Allwinner.

@ovidiu
I don’t think it will be PowerVR and I sure hope not. It will likely be a Mali given the fact that PowerVR supports DirectX 11 ( the latest ones )

direct 9.3 ? hope like hell they didn’t go with vivante (though vivante claims direct11 for all its decelerators)
and Rockchip has used them before.
Vivante do have good opensource drivers but hardware is slow compared to mali and powervr – though they usually claim higher figures
http://www.cnx-software.com/2013/01/19/gpus-comparison-arm-mali-vs-vivante-gcxxx-vs-powervr-sgx-vs-nvidia-geforce-ulp/

“MayBach”? Maybach was the very expensive car brand by Daimler, that was discontinued in 2013.

Such a name isn’t too great, I would say.

My guess is the GPU is a PowerVR G6100 or perhaps a G6110 as it’s only DirectX 9_3 spec. It’s a one cluster variant for low cost SoC’s. This GPU is based on Rogue 6XE architecture so should still be quite potent, depending on clock speed etc.