T-chip, the company behind Firefly-RK3288 development board and HPH NT-V6 media player, has sent me their latest company brochure this morning. The brochure mentions the company history since 2005, various tablets solutions they have done over the year, and new and upcoming products. One of the slides particularly caught my attention. 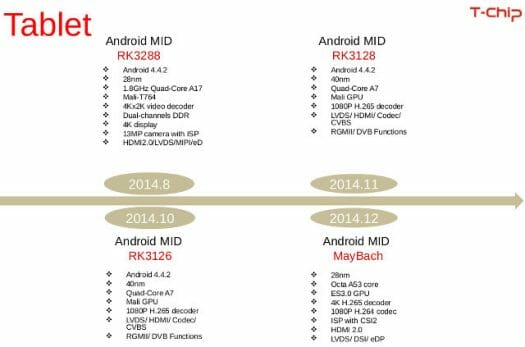 RK3288 is pretty popular right now, but I had never heard about RK3126 and RK3128 SoC with four ARM Cortex A7 core with a Mali GPU supporting HEVC decoding up to 1080p resolution. Both processors are manufactured using 40nm technology, so I’d guess these target ultra low cost tablets, which should become available in October and November 2014.

Even more interesting is the mention of “MayBach” Tablets. I’ve been told MayBach, which could just be a temporary codename, is an upcoming Rockchip SoC. Based on the information in the slide, it should be an Octa-core Cortex A53 processor with an unnamed GPU supporting OpenGL ES 3.0. Supported features include 4K/H.265 video decoding, HDMI 2.0 / LVDS / DSI / eDP video outputs, and an ISP with CSI2 camera interface(s).

I could not find more information about a Rockchip Cortex A53 on the web, except that Rockchip licensed Cortex A50 cores in November 2013.

Disappointing. This conflicts with new that the board would be listed on Taobao next week. so if you want the board, you may have to order by email ($129 + shipping), as mentioned by Charbax, or simply wait for Radxa Rock 2 instead.

I always wonder about Rockchip/Mediatesk/Snapdragon mainline kernel support. I know what to expect from Tegra and Exynos chips, and probably Allwinner though I haven’t yet used it. I would happily run Rockchip AArch64 silicon as long as I don’t need to stress regarding software support.

I heard they only made few Firefly boards. We will buy one when it’s out 🙂

Given Beelink are about to change their PCBA again then maybe RK have changed their reference design again and this would throw everyone out?

Interesting to see comparisons between the MayBach and the Atom x3 chips.

Rockchip smart TV box SoC RK3128 won the top award Best Market Performance! Thanks to the affirmation of the committee!