When Coolship keyboard computer was announced in 2013, it caught the attention of some people, but unfortunately the crowdfunding campaign was a disaster despite reaching their funding target,  and few people, if any, ever received the device. But if you are a nostalgic and still would like a Commodore C64-like computer in a keyboard, a company call Acooo has designed OneBoard PRO+ based on Rockchip RK3288 processor and with a backlit mechanical keyboard housed in an aluminum case. 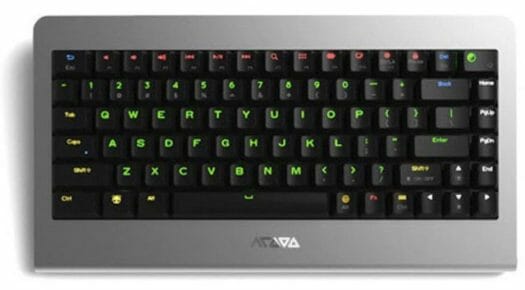 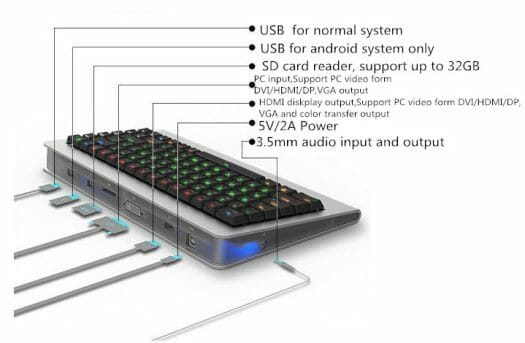 The Android 4.4 keyboard comes with a power adapter and cable,  a “PC-line connect cable” with DVI connector on one side, and HDMI + USB on the other side, an HDMI cable, and a “DIY accessory tool box”. The keyboard is actually designed be used both as an Android system and a normal keyboard for your PC or Mac, acting as a dual operating system computer. The connection diagram below makes it clearer. 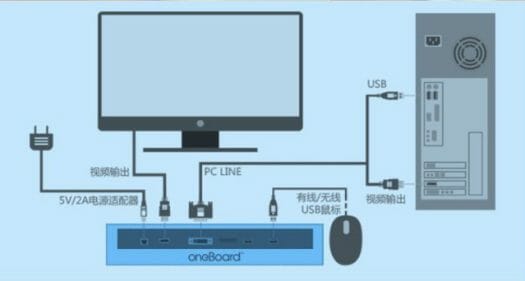 So the PC line is for the display and keyboard connection to your computer, and the video is always outputted via HDMI, but a USB mouse can be connected on a USB port and be used by both the computer and keyboard. The top right Yin/Yang key is used to switching between Android 4.4 and the computer input. Chinese speakers may want to have a look at the promo video.

The price is the killer; maybe 1/2 of it is for the mechanical kb I think…

Trying to get my head around this. It has an HDMI input and and HDMI output. The output is switchable between the RK3288 running android and whatever is on the HDMI input?

Could be useful for, say, running Kodi/XBMC on the RK3288 and switching over to the HDMI input for an Xbox or PS?

this device seems to me as pure non-sense…

I love the sound of it, but the price just seems $100 to much! Converting into sterling then I might as well by a cheap windows 8 laptop!

So this certainly partially explains the price.

So I bought one of these. Experiences so far: – Android via mouse and keyboard is a mixed bag. Lots of things don’t work super great. Lots of apps in particular games and emulators don’t handle a non-touch screen well. – The Android installation shipped on it is very Chinese. An update or two has improved translation for certain things, but it definitely ships with an interface with many apps and messaging without English translations. – I was able to run MAME4droid, an Atari ST, an Atari 8 bit and SNES emulator on it. The two Atari emulator don’t work… Read more »

And I should mention that the actual hardware is rock solid. Great keyboard, excellent metal enclosure. Well built, looks great.