One of the first quad core Android DVB-T2 receiver was VideoStrong K1 that now sells for $80 on Aliexpress, but there’s now some competition from Geniatech, with the same Amlogic S805 processor, thanks to Mygica ATV586 Android TV box featuring either a DVB-T2 or ATSC tuner. 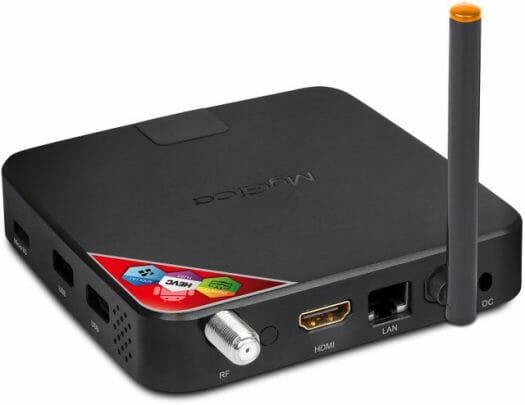 The box runs Android 4.4.2 (Kitkat) with various pre-installed apps like Kodi 14.1, YouTube, Netflix, Hulu and more. The DVB-T2 function is allegedly supported directly within Kodi, which might be an advantage against competing solutions, and the system can also stream digital TV from the box to your smartphone or tablet. Other features include OTA firmware update, EPG and TV recording to an external hard drive.

The box should be available by the end of the month for $139 (MSRP), which is quite a mark-up compared to Videostrong K1 price, but hopefully actual retail price will be a bit lower, and software may justify the price. Mygica ATV586 must be based on Geniatech ATV586, but with some modifications like the addition of an external Wi-Fi antenna, which replaces optical S/PDIF on the Geniatech device.

139 usd?!?!?!?! Good joke from geniatech. Instead that they release android 5 for their existing S8xx devices they preffer to sell new devices with android 5

kusta :
… they preffer to sell new devices with android 5

MyGica/Geniatech support is very bad. They always preffer to release new device with new software. They already have S802 and S805 devices in market but they never care about end users.

Their support for users finish when you give them your money and after that you are in your own.

@kusta
@Kusa
As I known, all S802 and S805 devices have online upgrade, and MyGica.CA http://mygica.ca/ has 24 hours online service and support, Why you said that MyGica don’t care about the end user