There are several Android media player with a digital TV tuner on the market, such as WeTek Play, but most, if not all, are based on Amlogic AML8726-MX dual core Cortex A9 processor, and so far, I have not seen quad core Android TV boxes with a built-in tuner. This is about to change thanks to Videostrong K1 an Android 4.4 media player powered by Amlogic S805 quad core processor, and an optional DVB-T2 tuner. 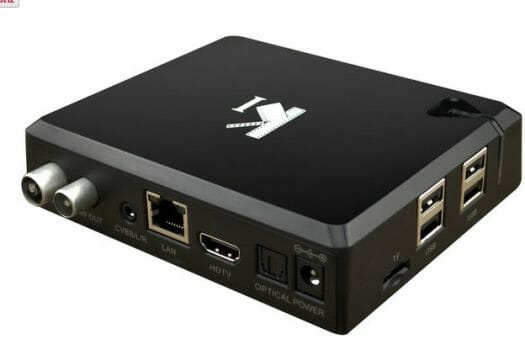 The device runs Android 4.4 with XBMC pre-installed, and comes with an IR remote control, a power adapter, an HDMI cable, and a user’s manual. I could not find any details about the included software for DVB. Compared to devices with AML8726-MX, you should probably expect similar CPU performance, but the GPU will be much faster, and the system will also support H.265 /1080p hardware video decode. 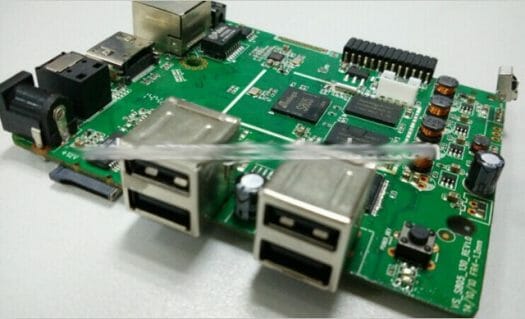 I found the information on Shenzhen Videostrong’s Alibaba page, and based on the board name “VS_S805_…” they should really be the designer and manufacturer of the board, and not only a reseller. The factory price listed on Alibaba is $25 to $35, but usually a tuner may add about $10, and since Amlogic S805 based boxes like MXQ-S85 go for $50, I’d expect the tuner version to cost around $60 retail.

[Update: Another model with similar specs, Venz T2, is already listed on Aliexpress for $60].

@CSylvain
Ah I see now. The title is Amlogic S805, but the description is AML8726-MX.
Hard to know what it is exactly then.

Have you tested this box does it work? can you use the PVR functions from XBMC/Kodi ?
Missing Wifi 300N.

Would love to have one of those if they work the Europe (Netherlands).

@Chris
I’ve just found it online. If I get one I’ll review it, but I have not been contacted to review such device yet.
I think PVR from Kodi is very new, just the latest development, so currently they probably use a separate app.
In the past, people have usually been disappointed with DVB apps in Android -> http://www.cnx-software.com/2014/05/22/unboxing-of-hd18t-android-media-player-with-dvb-t2-tuner/#comment-197090

That is except with Wetek Play which has done a decent job with their WeTheater app.

Does it feature TVheadend server with XBMC/Kodi support on Android?

Does DVB-T2 tuner can be used as DVB-C tuner like this Astrometa device?
http://www.dx.com/p/mini-dvb-t2-usb-dvb-t-t2-c-digital-tv-receiver-w-fm-dab-antenna-white-black-283237

@Harley
Since this TVHeadend thing for Android appears to be quite new, I’d assume not, but hopefully in the future.

@sam
I’ve noticed DVB-T2 tuner are often sold as supporting DVB-C too. I don’t know the technical reason (yet), so I’m not sure a DVB-T2 tuner will always support DVB-C, and for this product in particular I just don’t know.

In the specifications, it says HbbTV, and CAS Support Conax, Novel SuperTV CA.
I have a little trouble believing it !

@CSylvain
Recently Geniatech wanted to send me S802/S812 TV boxes for review, but since I’ve tested this type of device several times, I looked for something more interesting and found:
ATV1820 – http://geniatech.com/pa/atv1820.asp?vd=rj
ATV1826 – http://geniatech.com/pa/atv1826.asp?vd=rj
Both of which have DVB T2/S2/C, ATSC, or ISBT tuners, however they don’t seem interested to send those boxes, so they must not be quite ready yet.

@CSylvain
About DV7810-S2, they’ve repeated the CAS Support Conax, Novel SuperTV CA support on other pages including the product page and their blog. They also have DV7810-T2 (DVB-T2) and DV7810-IS (ISBT), but I assume with these features they don’t sell to individuals, and they must target content providers.

@Jean-Luc Aufranc (CNXSoft)
Thank you for all that information !
I think many model will emerge soon, I look for model S812 because Wetek we deny that the S805 was less powerful than the MX, otherwise they do not plan to make a version S805 : http://www.wetekforums.com/viewtopic.php?f=22&t=127#p1630

@Jean-Luc Aufranc (CNXSoft)
It looks serious their product, I found the official page : http://en.sdmctech.com/index.php/Products/content/id/74
Can you educate yourself for the HbbTV ?
If it is included in their firmware because it interests me !

I have waiting for this type of boxes mostly with ATSC,videostrong representative has been send some email for over a year for dual core and right now quad core in amlogic, but I think this type of devices are not ready yet a%100 for the show

@Jean-Luc Aufranc (CNXSoft)
most DVB-T2 demods are C cabable too, as they have to support QAM anyway,
so they just make a hybrid ic instead of taping out multiple chips

however,
1. they not always can demod QAM256 which is used in some regions
2. the tuner must be able to tune on C frequencies (hybrid T/C tuner)

This model is Mass production already on the 2015. Jan , Both for Android dvb t2 and android dvb s2 , under Amlogic 805 CPU , now we plan to do other tuner , Like ATSC , and ISDB-T And for Cuba DTMB tuner already mass production.

Any suggestions please put forward it , we will continue to make it better .

I am Miranda from Videostrong,

except that, we have do our another private model:

Any question, pls be free to contact with us
Skype: tosuccecss01

@Miranda—-Videostrong
oh nice, I didn’t know it
when we can expect the KII

On HK fair we will show our newest product! including the Android + Dual tuner+AV IN/HD IN Recording

@Miranda—-Videostrong
Thank you for your response, we look forward to one day see this box for public sale ?
I have been contacted by a manufacturer, which gave me the documentation on this box, I relayed to the manager of this site : http://www.cnx-software.com/2015/03/12/dv7810-t2-is-a-quad-core-dvb-t2-android-receiver-with-a-ca-slot-conax-and-novel-supertv-support/
https://www.youtube.com/watch?v=zDuUHK4OI1k

I wonder if this is a mistake?

Seems that I have one of Videostrong’s S805+DVB pcbs. Never toyed with it…

@Jean-Luc Aufranc (CNXSoft) do you have the specifications for the k1 “S2 only” tuner ? Apparently the “DVB S2 only” tuner module (from K1 DVB) has linux support whereas the S2/T2 does not. It’s hard to understand russian translations but that S2 module may also works on K1+ (s905) box and there seem to be an image for that unofficial combo, no idea how you would build it though besides buying both boxes. Of course having an openelec image for your hardware in no way guarantees that it will work fine, especially when dvb hardware is involved. And not having… Read more »

@sam
I’ve noticed DVB-T2 tuner are often sold as supporting DVB-C too. I don’t know the technical reason (yet), so I’m not sure a DVB-T2 tuner will always support DVB-C, and for this product in particular I just don’t know.

there are still some bits different, otherwise Astrometa wont offer two drivers for T2 OR C

Do this device process HEVC by dvb-T2 tuner?

@Morris S.
I could not test it myself, since in my location I don’t have TV channels with HEVC, but I know that over DVB-S2, Amlogic S905 TV boxes with tuner can handle 4K HEVC @ 60 fps.