Intel announced three Atom x3 processors combining x86 cores with ARM Mali GPU a couple of months ago, and Intel Atom x3-C3130, the lower end processor with two x86 cores up to 1.0 GHz, an ARM Mali-400MP2 GPU and a 2G/3G modem, can already be found in Teclast X70 7″ Android tablet selling for just $70 on GeekBuying, Tinydeal, and probably others Chinese online retailers. 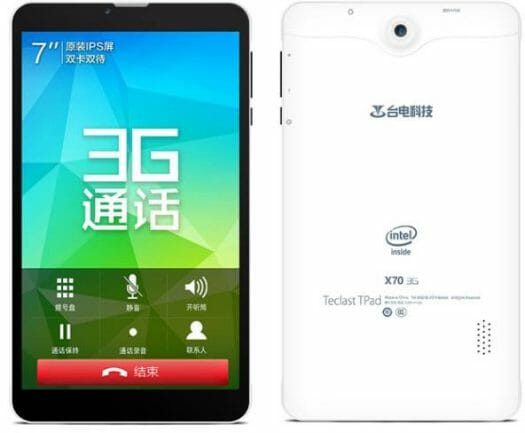 The tablet runs Android 4.4, and should come with a micro USB cable, a 5V/2A power adapter, and a user’s manual. Companies also promote it as a phablet, as the 2G/3G modem is not only for data, and you can make phone calls. Memory is tight, and screen resolution very low, but at least it’s very cheap.

Mali are you sure?

if they ever release one with the atom x5 mode, i migh be tempted though… quad core with possibility of 2 gb of ram and more

With 512Mb you just can’t do anything!
But with 1Gb, this will be a great device, so I guess there will be other versions??

Are there any benchmarks yet of these new Atoms?

this thing has fried my 64Gb SD card. I had to open the case to get it out but the card and all my data are destroyed. After that the left side of the screen does not react to touching . So I am sending it back , do not want to risk another one,esp since technical data you provide on the site is simply false: it is not quad core 1,8Ghz processor. SoFIA Atom x3-C3130 is a dual-core 1 Ghz and the picture of this device does not true-bezels on the side are not so small as on the… Read more »