Intel had already announced their plan to change Intel Atom branding to use x3/x5/x7 nomenclature in order to make it easier for consumers to navigate their product offerings, but the company has now provided much more details during their press conference at Mobile World Congress 2015. 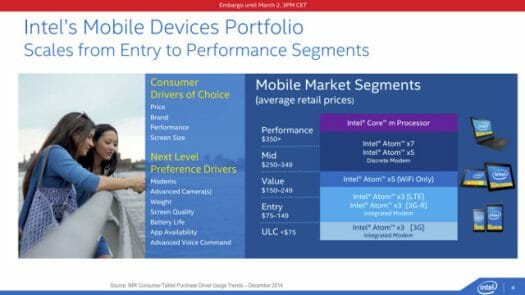 Intel Atom x3 (previously known as SoFIA) will be entry and ultra-low cost processor up with 3G or LTE connectivity found in products up to around $150, while Atom x5 and x7 (previously known as Cherry Trail) will be found in tablets between about $200 to $400, with the top performing devices going with Intel Core M processors. 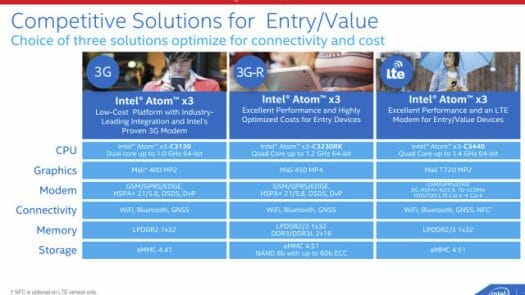 Intel Atom x3 are very interesting because they mix Intel 64-bit cores with ARM GPUs (to keep the cost down), and parts with RK suffix are made by Rockchip. Three x3 processors are currently available: 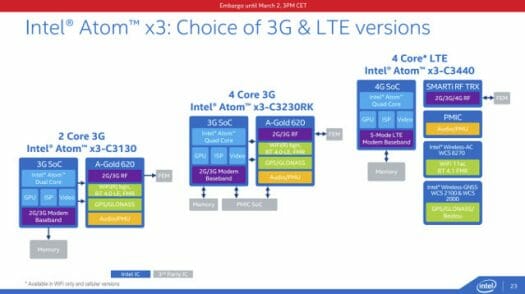 Atom x5 and x7 will however be 14-nm processor, bringing lower power consumption, but a least initially, a higher cost. These processors will feature Intel Gen8 graphics, and support next-gen LTE Cat-6 thanks to Intel XMM-726x modem, and be found in 7″ to 10″ Windows and Android tablets and 2-in-1 hybrid laptops priced between $120 to $500. 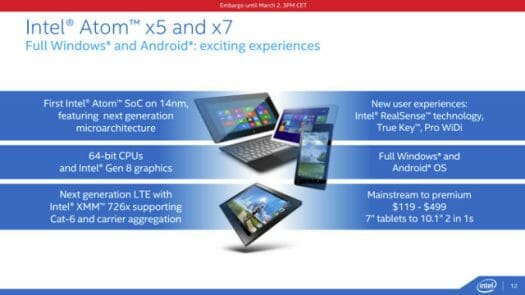 At first it seemed like the company did not provide that much information for Atom x5 and x7 processors just yet, and that it just expected products by Acer, Asus, Lenovo, Dell, Toshiba, and HP should be shipping in H1 2015. They did however provide a block diagram for Atom x5 / x7 processors which reveals more details to what can be expected including HDMI 1.4b up to 4K30,2K internal display (DSI / eDP), PCIe, USB 3.0, eMMC 4.51, but no integrated Ethernet MAC or SATA IP blocks, although these could be added via the PCIe interfaces.

I could not find any TDP figures, but thermal dissipation should be around 2 to 5W since Atom x3, x5 and x7 target tablets and smartphones.

ARM Mali GPUs? How well are those GPUs supported under Linux?

So Intel change GPU from SGX to ARM MALI?
one driver blob to another driver blob ?
so cool Intel 🙂

We need, as a community, to run a Kickstarter or Indiegogo campaign to raise funds to hire designers and engineers to work on a x5/x7 open source single board computer like raspberry pi or odroids to name few obvious leaders.
Who’s in with me?!