If you need your Android TV box to record external video via HDMI, few options are available on the market, and one of them is Zidoo X9. It works relatively well, and gets frequent firmware update. It now costs around $120, but Tronsmart has now launched a model based on the same Mstar MSO9810 processor with HDMI recording function that costs $89.90 shipped on GeekBuying or Ebay. 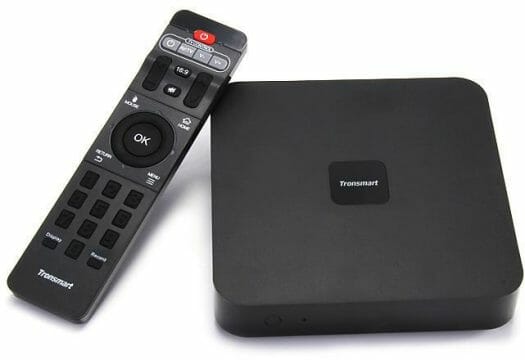 Compared to Zidoo X9, you’ll have to trade the aluminum enclosure for  plastic one. you’ll lose Bluetooth, Wi-Fi only support 2.4GHz (no 5.0 GHz), the two external antennas are gone, and so is the small LCD display on the front panel, and finally the system features 1GB RAM instead of the 2GB RAM found in Zidoo X9. 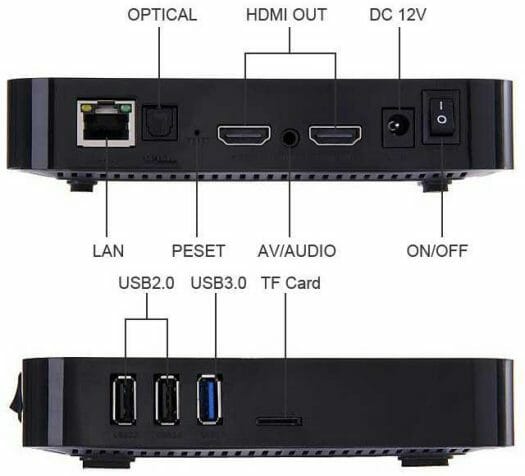 Pavo M9 comes with an IR remote with IR learning function (The same as Zidoo X9), a 12V/2A power adapter, an HDMI cable, an a user’s manual. The box runs Android 4.4 with Kodi pre-installed, and OTA firmware updates support. Since Kodi is likely to be the same version as in X9 TV box, bear in mind that some videos, especially 4K ones H.265 videos, may not play very well in Kodi, and HDMI audio pass-through may not work, but all these will often work just fine in the other media player that comes pre-installed in the box, and that gets updates more often.

No idea about MSO9180D1R. Just curious. How is software support ? Free software ? many blobs ?
Thanks

What about HDCP? Is record really working?

So had it been priced that you can record from a casted device, like chrome cast or ezcast? What ends would hdmi in serve to do? Any experience anyone?

I tested with Tronsmart pavo m9 to record the apple tv , it can work well, will give a try to chrome cast, and ezcast later, i am sure it can work .

Beside recording, it it possible to stream what comes from HDMI input to other device?

Very bad, HDMI 1.4b output so it means [email protected] only 🙁

eric : @kusta Yes, this soc don’t support [email protected], now only the rock chip rk3368 is confirmed to support [email protected], check here: http://www.tronsmart.com/news/tronsmart-will-launch-the-world-s-first-cota-core-64-bit-android-5.1-tv-box-orion-r68 Eric “Tronsmart will launch the world’s first octa-core 64 bits…”, why this brand claim to be the first one when we have already seen these specifications on the market? As example the A90 from CSQ. Maybe next month tronsmart will also launch the world’s first “cola drink” called trons-cola 😀 I never have used tronsmart products, but it seems like new products are not stable until at least 6 to 12 months. And of course, this can… Read more »

We never seen the CS A90 sample since they claim they are ready to release the rk3368 device, but tronsmart already sent me the sample to test. for me, this is really the world first one rk3368 device, but well, like you said, the world first is just a marketing skill maybe. i also care about the product quality. the first test for their rk3368 device is positive. for us, Geekbuying.com, as the biggest android tv box sale platform, we have worked with so many factories, now the android tv box market in china is terrible, like the tablet business,… Read more »

Well, as user I can’t see any difference between “develop” the first XYZ and “test” the first XYZ. I guess the first for us must be the first available to buy. Anyway, as well as some ones are selling refurbised material, a lot of brands are selling new products with lots of bugs AND THEY KNOW THIS but still selling. A trusted brand never will sell defective (because these problems means the product is defective even it can be fixed by software) products. I can not compare the bugs found from a SONY product (just as example) to the bugs… Read more »

As I see, Beelink is following same strategy than Tronsmart. Launch the products thinking in the big USD, never thinking in USERS.

These still have use a third-party closed source external player that have to be launched?

What codec is used to encode recordings? Is it AVC or HEVC? Thanks!

@Bill
If it is the same as Ziddo X9 (which it should be), it’s recorded using H.264 codec embedded in TS or MP4 container.
You can download some recording samples via http://www.cnx-software.com/2015/02/11/review-of-zidoo-x9-android-media-player-and-video-recorder/

We have a promotion for the Tronsmart Pavo M9, only $50 for black friday deal!

@Jean-Luc Aufranc (CNXSoft)
Thanks, I was just looking for something like this, and now super cheap 🙂

is there any HDMI recorder with H.265 codec support to encode FHD 1080p?