A few months ago, I wrote about low cost logic analyzers selling for $75 and up, but yesterday, I stumbled upon an even cheaper, and admittedly lower end, logic analyzer called USB123 USBee AX PRO, allegedly a clone of the original USBee AX PRO minus the analog inputs, that sells for $9.99 on Dealextreme. [Update: It can also be bought for $5.60 on Aliexpress including shipping to most countries] 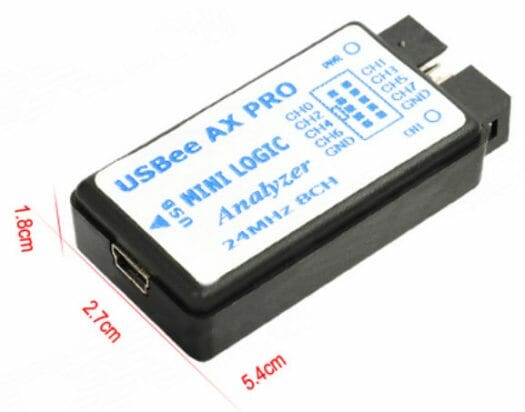 The tool ships with 10 Dupont cables and a USB cable to transfer data to your PC. DealExtreme also provides CDROM image with a user’s manual and utilities such as USBee program and a key generator… But many users report either that the program does not work, or it’s difficult to setup, requires changing the PID/VID, and so on. DX first listed the device in 2012, and it’s become relatively popular, with one person writing a review that year.

Luckily you don’t have to use (cracked) proprietary software as USBee AX PRO mini logic analyzer is compatible with Sigrok, and users’ feedback is that it work in Windows and Linux both with the command line and PulseView graphical user interface.

There are similar clones at this price of saelae’s logic analysers. Their software works out of the box, and is multi platform.

A cheaper one (half of the price) is available at aliexpress, e.g.: http://www.aliexpress.com/item/1set-New-Arrival-USB-Logic-Analyze-24M-8CH-MCU-ARM-FPGA-DSP-debug-tool/1971933314.html

This one is much cheaper. It also works well with PulseView on my Ubuntu PC.
http://www.aliexpress.com/item/1set-New-Arrival-USB-Logic-Analyze-24M-8CH-MCU-ARM-FPGA-DSP-debug-tool/1971933314.html

@Armer
$1.84 cheaper for me once shipping is included, but still cheaper… I guess it’s the same model
Already bought from DX. I can’t buy easily from Aliexpress.

@Jean-Luc Aufranc (CNXSoft)
OK.. I’ve just checked France and US, and shipping is free…
I’ll update the post above.