Last year, WeTek launched WeTek Play Android TV receiver with DVB-T2, DVB-S2 or ATSC tuners, and in my review of the DVB-S2 version I found out it was a rather capable device despite the low hardware specifications. The company is about to launch WeTek Core, a media player powered by Amlogic S812-H processor, running Android 5.1.1, as well as supporting Netflix up to 1080p. something most other Android media players can’t handle. 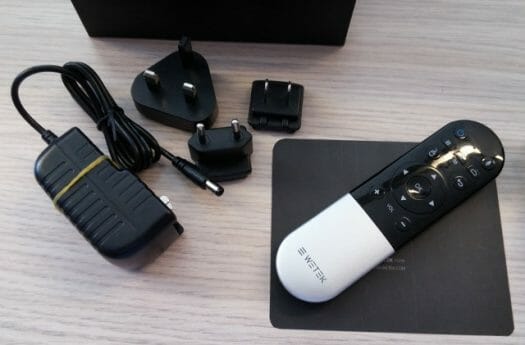 The box will ship with a power adapter suitable for UK, USA and EU, and a remote control featuring RF and IR technology, and a microphone to support Google Voice. Android 5.1.1 will be pre-loaded to the media player, but users will also be able to run OpenELEC, various custom Android ROMs (CyanogenMod, AOKP, AOSP, Omega..) as well as Lubuntu.

The company claim that WeTek Core is the first Amlogic device that support Netflix in High Definition is backed up by a demo video showing Netflix up to 1920×1080 @ 5800 Kbps.

The box should launch in September, but the price is “rumored” to be 109 Euros (inc. VAT) in Europe.

Would be interesting to see a Lubuntu box with more RAM and Flash.
How good is Lubuntu support (e.g. video driver support ?)

Interesting. The lack of Netflix HD support is a limitation in the Netflix Android app. How did Wetek fix this?

@HansHa
I’ve read once that HD support required some license from Netflix, so maybe they paid for it.

Does it have the same TV-tuner drivers/apps as WeTek Play?

@Harley
Sadly they don’t seem to plan for tuner support, based on comments in Forum posts.

So the main benefits for this box are Netflix HD, their IPTV software (same as WeTek Play, TBC), and their own implementation of Android 5.1, which they’ve been working on for 6 months.

There will be tunered versions for all standards for sure.
Wetek will take care about that , we will see mixed tuner solution dvb-s t2 and c.
My concern is the lack of the hdmi 2.0

Finaly they use a powerful SOC. They made the same bullshit like Zidoo in the past…using outdated or weak SOCs but selling them for a high price. Sure their support is better than most of the other companies but come on…

Agree with you …. the only problem is that Nvidia Shield TV just established a new baseline … Tbh i don’t see chinese silicon makers/vendors to reach that baseline in the next 1 or 2 years… but who knows

Any chance JL to see very soon an review for the Nvidia Shield TV?

@ovidiu
I can see many big sites have already done a review, so I’m not sure that many people who be interested in a review here.

It’s not available in Thailand either, meaning Nvidia Shield TV would probably cost me $300 to $400 once shipping fees, US forwarder fees, custom fees, VAT ,etc.. are included. So I guess I’ll skip.

What happened to the choice of internal TV Tuner cards ? The differentiating feature Wetek had versus all the other ‘TV Boxes’ was that it actually was a TV Box that could receive live TV. Also, not much use if not supporting current WiFi-AC standards. Last year I liked the ‘Wetek Play’ concept, but it was let down by an obsolete SoC and as a result, generally uncompetitive performance spec relative to the TVless ‘TV-Boxes’ at the time.

What happened to the choice of internal TV Tuner cards ? The differentiating feature Wetek had versus all the other ‘TV Boxes’ was that it actually was a TV Box that could receive live TV. Also, not much use if not supporting current WiFi-AC standards. Last year I liked the ‘Wetek Play’ concept, but it was let down by an obsolete SoC and as a result, generally uncompetitive performance spec relative to the TVless ‘TV-Boxes’ at the time. What I seek is a ‘Wetek Play’ concept, but with WiFi-AC, dual external antenna, a choice of DVB-T2 or ISDB-T mincards like… Read more »

@ovidiu
hi,
I’m curious about the board.. might be something already on market.. and today we don’t have HDMI 2.0 on S812..
http://www.amlogic.com/product03.htm

For a streaming device SHIELD TV is FAR too expensive. I wouldn’t purchase it until it hits the $99 or below mark. Its weird that this device has 1080p Netflix as I don’t see it on the official cert list. I wonder if their Netflix app can be used on other Amlogic boxes and still get 1080p? I am gutted that my Beelink M18 with a S905 is going to be limited to SD. In fact, I probably will not even open the stupid box once it arrives. Just going to toss it on ebay and hope it sells fast…… Read more »