Seeed Studio has design a modular and open source phone it calls RePhone Kit Create. The kit allows you, or/and your kid(s), to assemble their own phone based on building blocks including a 2G or 3G core module, a touchscreen display module, an audio module, and pre-cut, seawable, washable, and easily drawable Kraft paper to make the case. The kit can also be used for IoT applications using cellular and Bluetooth connectivity, and extra Xadow modules GPS, NFC, motion sensors, camera and more.. 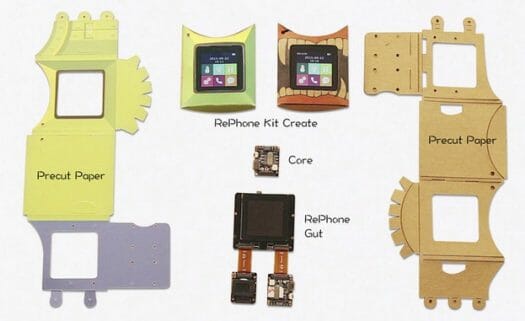 The company has not released the full specs and documentation yet for the modules, but this should be done by October.

The default firmware allows you to make and receive calls, send message, and play music, but the phone kit can also be programmed with the Arduino IDE, as well as Lua and Javascript thanks to an SDK based on Eclipse IDE for C/C++. IFTTT is supported for home automation, and you can control its behavior it using your smartphone. Seeed Studio also claims the kit is compatible with Pebble Time, but details are sparse, except for a “RePhone Strap Kit for Pebble” that includes an adapter, GPS and NFC modules, a battery, and structural support. 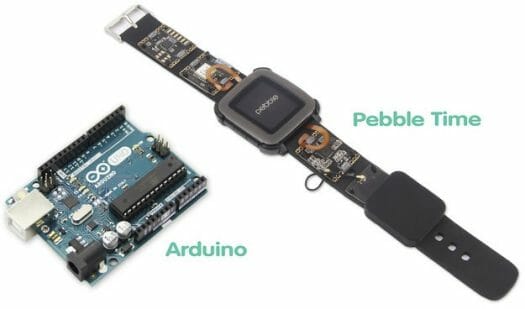 RePhone project launched today on Kickstarter, and so far, it raised about $45,000 out of its $50,000 target. A $12 pledged should get you the GSM + BLE core module, $29 the 3G module, and $45 the RePhone Kit Create. There are also various other kits with core and Xadow modules for $39 and up. Shipping is not included, and delivery is scheduled for January or February 2016 depending on the perks. If you don’t feel like participating to a crowdfunding campaign, the RePhone will be sold on Seeed Studio Bazaar next year.

Reminds me of the LinkIt ONE board, open firmware and all the options of a smartphone (GSM, GPRS, GPS, Wifi, Bluetooth etc) on one board.

That thing is quite popular… almost $200,000 raised so far, and first stretch goal (3G Create Kit) about to be unlocked.