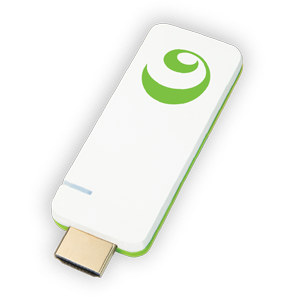 Apart for the lower memory capacity (256MB vs 512MB), Kinoma HD hardware looks pretty similar to ChromeCast 2.0. But the main difference is in the software, as while ChromeCast 2.0 / Audio is a consumer device, Kinoma HD is a “scriptable stick for developers who want to display visually rich content on  biggest displays” running Linux, that targets “embedded and Internet of Things (IoT) product prototyping”.

Scripting is specifically doing using JavaScript, and handled by Kinoma’s XS6 JavaScript engine, implementing JavaScript 6th Edition and conforming up to 96% of the specifications according to the company, and better than all implemtations listed in that table. Marvell also claims KinomaJS has a small footprint as it works on devices with as little as 512KB RAM, and is four times faster than their previous javaScript 5th edition implementation.