[Update: I’ve finally received an answer: Lemon Pi and RoseapplePi makers are different companies, but they just happen to both use the same Actions Semi S500 reference design, and RoseapplePi is manufactured in Taiwan. The picture above is V1.0 board, but V1.1 will have some modifications]

Lemon Pi development board was launched this May via a Indiegogo campaign. The board, based Actions Semi S500 quad core Cortex A9 processor, got fully funded by over 200 backers, but at the time of launch, some people questioned the used of the word “Lemon” in a product name, as it has several pejorative meanings, including “something that is useless or crappy”. I was contacted about a new Roseapple Pi board yesterday, and upon checking out the details, it looks exactly like the Lemon Pi, except it got upgraded to 2GB RAM, just like in Indiegogo… 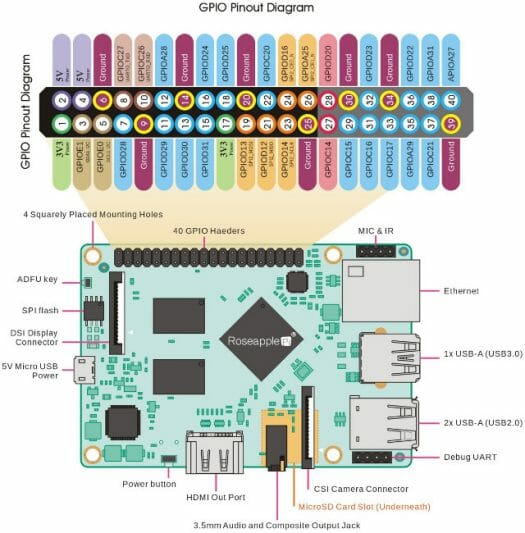 Supported operating systems include Debian, Ubuntu, Fedora, and Android 5.0/5.1. I’ve been informed source code and hardware files will be uploaded to xapp-le guthub account (there’s nothing there right now), and developers can get support via linux-xapple open source community (aka XApple) dedicated to Linux on Actions Semi processors and boards with Forums and a Wiki. XApple is said to stand for “Actions (represented by X) APplication Processors with Linux Embedded”.

There’s no price for Roseapple Pi board, but for reference Lemon Pi was $35 + shipping on Indiegogo, and it should be shipping soon since I’ve been asked to provide my address for a sample. A few more details can be found on Roseapple Pi website (Still work in progress).

Looking forward to your review!

USB3.0 is great. Then why… really why 10/100 ethernet rather than GbE ? Too bad (I am still looking for a cost-effective board that would have GbE + USB3.0 as a frontend to USRP for software radio)

Still wondering, how many cents can be saved by 100M Ethernet compared to GB??
(Or is it sillyness to go that route?)

Looking at the official stated interfaces on the S500, the SoC supports 10/100 stock. In order to get GbE, you’d have to hub off the USB3.0 (which semi-defeats the purposes of offering both…) which adds to the BoM cost of the board with actual minimal gains, to be honest. IF you want both, you honestly need to find an SoC that has both on the device. This one, the Broadcom ones, and a few others don’t- because they’re slated to industrial, media kiosk, and the like applications. All of which GbE is “nice” but definitely NOT needed. I strongly suspect… Read more »

@ade
Why not use a USB hub and USB-to-Gigabit adapter?

> “Why not use a USB hub and USB-to-Gigabit adapter?”

Finally I got an answer to my email. Lemon Pi and RoseapplePi are made by two different companies, but they used the same Actions Semi reference design. The board picture on RoseapplePi website is an older version, and a new version has been produced (engineering samples for now). They have just not updated the website, that is still WIP.

Hopefully if they change the layout, it will fit a rpi case as the odroid c1+. Hopefully the opensource driver for the powervr will also become reality (no news about that?).

Seems sources are there now:
https://github.com/xapp-le

Any guess on what the CPU clock speed is?

Thanks for the info. I looked on the Actions Semi S500 product page and there was no information about CPU clock speed.

Hi…
Where can i by this board ?

@Luís
Check the list of dealers @ http://roseapplepi.org/index.php/purchase/
There are all in Asia so far.

@ade
Gb Ethernet would be nice but at least with USB3 you can just get a USB3 to Gb Ethernet adapter.

Ah, I’ve just twigged – good job I looked in here – my Lemon Pi might just be a Roseapple Pi!! Really would have been good if they’d put a name on the thing.

Hi Jean-Luc what do you think about http://www.cubietech.com/product-detail/cubieboard6/, I think that is a new product from cubietech and same components, Have you one for make a review?

@Pere
Somebody mentioned it to me, but I’m waiting for the launch. Actions Semi S500 is not exactly a new processor so I’m not sure it will be popular. SATA port is nice, but it would be implemented via USB, at least it should be USB 3.0.