Roku has announced the latest version of their video streaming player. Roku 4 comes with a faster quad core processor, supports H.265 & VP9 video playback up to respectively 2160p60 and 2160p30, and includes a new version of Roku operating systems.

The device runs Linux based Roku OS 7, and is said to provide access to over 300,000 movies and TV episodes, via online video streaming services such as Netflix, M-Go, Amazon Instant Video, ToonGoogles, Vudu and YouTube. Current generation Roku players & Tvs in the US, Canada and the UK will also be updated to the latest firmware between mid-October and November. 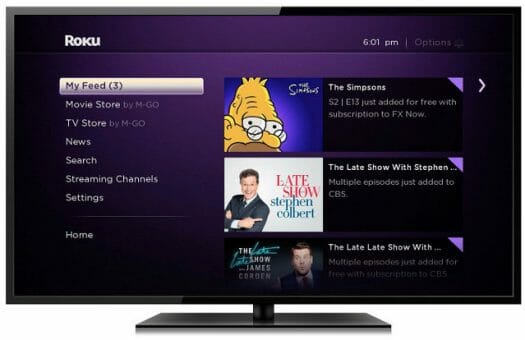 The streaming device ships with an IR remote control with voice search, gaming support, a small speaker, and a headphone jack, as well as in-ear headphones, two AA batteries for the remote, a power adapter, a Quick start guide, an “exclusive content offers”.Albeit the processor has not been named, previous generation devices were based on Broadcom processor, and Broadcom BCM7445 would fit the bill as a quad core ARM processor with 4K @ 60 Hz and H.265 support, and VP9 might have been implemented using GPU acceleration, which is why it’s limited to 30 fps. The company also announced BCM7445S recently, but it also supports VP9 @ 2160p60, so it’s unlikely the one used here.

You can find more details and/or pre-order Roku 4 for $129.99 on the product page. Delivery is scheduled for October 21.

While I would never buy a Ruku because it’s a almost completly closed platform and ecosystem, this device is still good news because its full Ultra HD playback capability and relativly low price will invite more competition in the 4K category.

On the media playback side this device matches Nvidia SHIELD TV featurewise at almost half the price, so hopefully this will presurse more manufacturer to push more devices capable of true 4K playback and output at 60 Hz/FPS.

will I be able to install a popcorn time on this device?

@Peter
People installed popcorn time on Roku 3 using a Plex server. See https://www.reddit.com/r/Roku/comments/21jui1/popcorn_time_on_roku/
So I assume it should be possible to do so on Roku 4 too.