Most Cherry Trail mini PCs launched on the market are powered by Intel Atom x5-Z8300 processor, and few have been announced with x5-Z8500 or x7-X8700 processors which are more powerful, and do not cost that much more based on Intel’s recommended customer price. Foxconn Kangaroo is one of these mini PCs with an Atom x5-Z8500, 2GB RAM, and 32GB eMMC, which has a bonus includes a fingerprint scanner, and sells for $99 on Newegg. 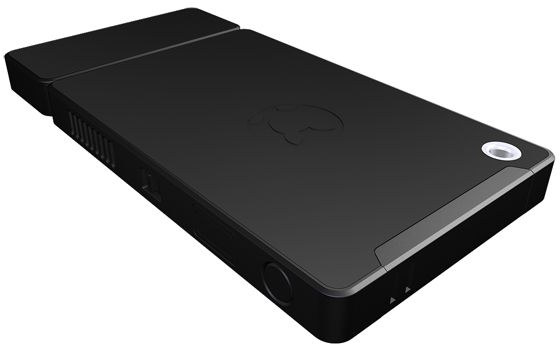 The mini PC is pre-loaded with Windows 10 64-bit Home, and since it sells on Newegg, it’s probably a safe bet to assume it’s an activated version. The computer will ship with the 100V~220V power adapter and cable, and the “Kangaroo dock.

I don’t really see the purpose of this separate dock (So they plan to offer different versions of the dock, and you could have one at home and one at the office) , but without it, you would not have HDMI, USB 2.0 or 3.0 ports nor DC input, and have a headless system without useful connectors except the micro SD slot. Kangaroo can also be used as a power bank and external USB storage, and the company also provides OSLinx app in order to use an iPad as an external display via a USB to Lightning cable.

If you are interested in the difference between x5-Z8300 and x5-Z8500 processor, check out the comparison on Intel website, with the key differences being a higher burst frequency for the CPU (2.24GHz vs 1.84GHz) and the GPU (600MHz vs 500MHz) and Intel Wireless Display support. Other noticeable differences such as memory support up to 8GB, and more PCI Express lanes are also interesting, but not relevant to this product.

I could not find Foxconn Kangaroo on Aliexpress, nor eBay, so it’s likely only available in the US right now. More details may be available on Kangaroo.cc, and if you plan on getting an extra dock it will sell for $39 (currently out of stock).