Allwinner & HonHai Precision Industry, better known as Foxconn, sent me an Infocus tablet based on Allwinner A83T processor with eight Cortex A7 cores up to 2GHz, and a PowerVR SGX544 GPU. Today, I’ll list the specifications of this tablet, show unboxing pictures, first boot video, and run Antutu benchmark.

The invoice calls the tablet “New Tab CS1 A83”, but Android reports the model as C2107, so I’m not fully sure what will be the actual name. It might well be New Tab CS1 A83, as I could find an Infocus an earlier Infocus New Tab CS1 tablet powered by Allwinner A31.

Anyway, here are the specifications I could derive from the device, and running Antutu/CPU-Z on the device:

I got the tablet from Foxconn Hong Kong via DHL, in the following white Infocus package. 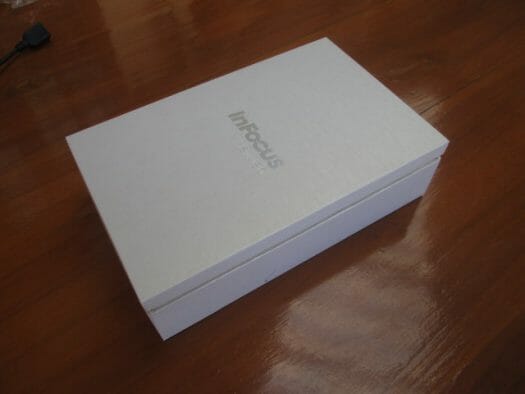 The tablet comes only with a 5V/2A and its USB cable, but it might be because I’ve got an early sample, and once it become available, there may be a user’s manual, screen protector, and many other accessories like a pair of headphones.

On the front, we’ve got the display and the 2MP front-facing camera. Stereo speakers are located on the bottom of the back of the tablet, and the rear camera on the top.

The other ports are power and vol +/- buttons on the side, and micro USB port, headphone jack and micro SD card slot on the top of the device. 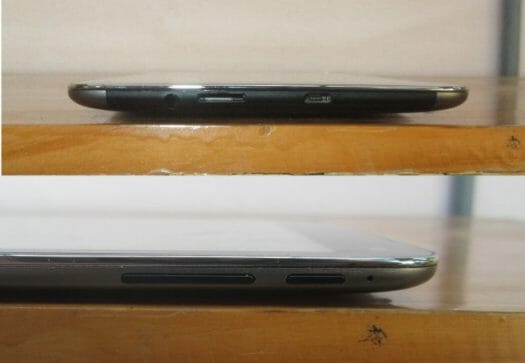 The tablet came fully charged, and pressing the power button one or two seconds boots the tablet, and Infocus tablet boots in just 15 seconds, it’s the fastest boot ever for the Android devices I’ve reviewed so far. You can watch the video below to see the unboxing and first boot for this tablet.

At first I thought Google Play was not installed in the tablet because I did not see the Google Play Store app in the list of apps.

But I eventually found out the Play Store was installed when I accessed it in Chrome, and looking again in the list of apps, the small icon on the top right is for the Play Store.  I don’t know if this is standard in all Android 4.4 tablet, or Foxconn customized it. The About Tablet section in Android section shows the model number is C2107, the processor UltraOcta-A83, and Android 4.4.4 runs on top of Linux 3.4.39.

The only problem I found during the first few minutes of usage is with the volume down button. I need to press it quite hard, and it won’t work. I don’t have this problem with the volume up button.

Alwinner A83T is a very new processor, so I ran CPU-Z to get information about both the processor and the tablet.

CPU-Z correctly detects the processor as an octa-core Cortex A7 clocked between 480 MHz and 2.02 GHz, and with an Imagination Technologies PowerVR SGX 544MP GPU. The model number is C2107 (C2107_CN) and the manufacturer Infocus. Kernel developers may be interested to learn / know AllwinnerA83T is an sun8i platform. Screen resolution is 1920×1200 pixels, 1506 MB RAM is accessible in Android (the rest being used for the VPU, and other hardware buffers), and the internal storage partition 12.40 GB.

The battery capacity (1,000 Mah) reported by CPU-Z is most probably incorrect. The tablet has a bunch of sensors as reported in the specifications.

That’s all for today. I plan to use the device for about a week, mainly browsing the web, checking email, watching videos, and playing games. I’ll also make sure to test the rear and front camera, evaluate the battery life (Is there a standard tool), runs some more benchmark, and report any issues I may have had in the full review. let me know if you’d like me to test anything specific.

The tablet is not currently up for sale, but the proforma invoice I received specifies the price is $170 per unit.

Thanks for the early review. It is an interesting chip, but its high time that Allwinner actually has a commercial success with a new chip. After the Allwinner A33/A31s (early part of 2013), all I see is delays and commercial failures (A20, A23, A33 etc). The A80 is probably also a commercial failure because it hasn’t shipped in a lot of tablets (where the volume is, chip companies don’t earn much from selling a few thousands chips into media players/sticks/boards). The PowerVR SGX 544MP reminds me of MediaTek’s MT8125 (successful tablet processor from early part of 2013, Asus MemoPad 7… Read more »

Bah humbug, only worthy All winner SoCs have been the A10 and A20… The rest… Worthless waste of silicon.

@anon
Indeed other than A10 and A20 the rest are pretty bad. I got a cubie4 that has a A80 and is collecting dust, need sell it on ebay one day.

@Vegator a lot of supposing , thinking and expecting… Have you actually used tested any of them. don’t know much about others but at least A80 was promising… AnTuTu have shown 40000+ score for A80 plus a lot of development and support is available for A80 optimusboard

Nice preliminary review. thanks
Regarding “…let me know if you’d like me to test anything specific…”
I’m working on one specific App for Allwinner tablets. A list of available “encoders” (OMX.allwinner encoders) will be very useful.
Thanks one more time.

@khatri I have used both A10 and A20-based devices and extensively run Linux on them…I still use the A20-based device and it works pretty well for that. For devboards, A20 is pretty good. What I am talking about when I say “commercially successful” is whether Allwinner sells enough chips at a reasonable price to make money on them. That means selling millions of units to tablet manufacturers, not thousands to devboards or media sticks/players. The A10 and A31/A31s were commercially successful. However, for about six months after the A20 was introduced (mid-2013), there were few A20-based tablets because the firmware… Read more »

Wow…. I’m stunned. I just now saw this post. That SoC or firmware is pos 😀 I have Amlogic M802 tablet (pretty much same specs as S802 chip) which costs aprox $200 have Antutu score 22000 without any kernel tweaks and patches to increase antutu score (I know because I built firmware for that tablet). With optimization patches applied, antutu score is 40000+ (of course that score is not real).