Pi-Top, a laptop kit based on Raspberry Pi 2 board and a 13.3″ display, and which cost about $299.99 with the board, and had a successful crowdfunding campaign despite the price nearly matching equivalent laptops on the market. CEED is now back on Indiegogo with pi-topCEED desktop computer also based on a Raspberry Pi 2 board and a 13.3″ display, but which much more aggressive pricing, as the kit could be yours for $99 with the board, or $70 without, and shipping was included to the few countries I checked out. 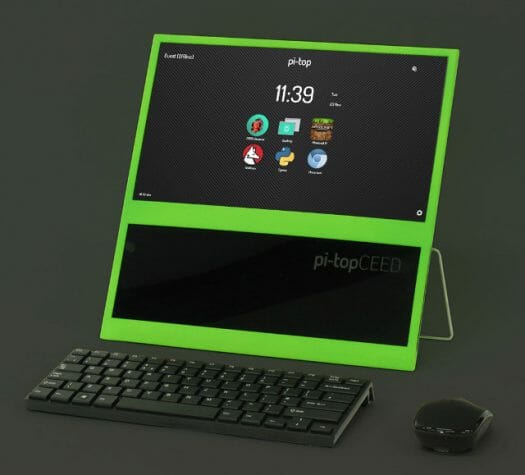 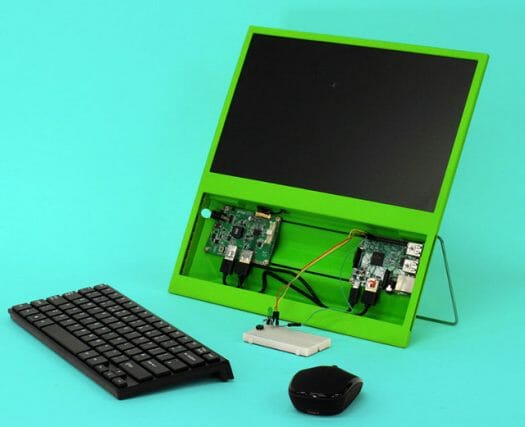 The cover on the bottom of the display is easily removable so you can access the Raspberry Pi headers for electronics projects. The four USB ports and Ethernet port of the board can conveniently be connected even if the cover is on. Two rails are used inside the computer to hold the Raspberry Pi board, the display board, and any other board or items such as the pi-topSpeaker which has been added as a stretch goal.

The $99 kit includes a Raspberry Pi 2, the display board, the enclosure and display, and a 8GB micro SD card pre-loaded with pi-topOS. So you’d just need to add your own keyboard and mouse, and maybe a power supply. If you already own a Raspberry Pi 2, you could also consider the $70 kit. If the pictures are any indications, the display board is only connected to the Raspberry Pi’s micro USB port (for power) and HDMI output, so it might also be possible to use other boards such as Orange Pi PC or Banana Pi inside the kit (TBC).

I love these cases they are making for Pi and wish that someone would cook something like that for 96Boards.

There are two problems to use other SBCs with the $70 kit:

1) size of the board and placement of USB and Ethernet ports (both Banana/Orange Pi won’t fit but ODROID C1+, Lemon/Roseapple Pi or the upcoming “UP board” would)

Will they make the green bezel 6 lines taller?? 🙂

So, this is a kind of no-go… next iteration, please.

@JotaMG
It’s all about whether the displayboard will crop the image in such cases or upscale. And 1360 pixels upscaled to 1368 will look blurry.

And the voltage must be 5V. 96boards (CE) use a higher voltage.

@peter
Erratum: what I wrote, accounts for the Pi-top. Dont know right now, if that Ceed works differently. Probably not, when it does not have a battery.

tkaiser :
@JotaMG
It’s all about whether the displayboard will crop the image in such cases or upscale. And 1360 pixels upscaled to 1368 will look blurry.