There are many FPGA boards on the market at various price points, but many assume you already have the technical knowledge to program the bard with Verilog or VHDL, and may not be suited to beginners. Nandland Go Board is a $50 board that targets beginners with tutorials to get started with blinking LEDs, controlling buttons, received data through the UART interface, showing display patterns via the VGA interface and more. 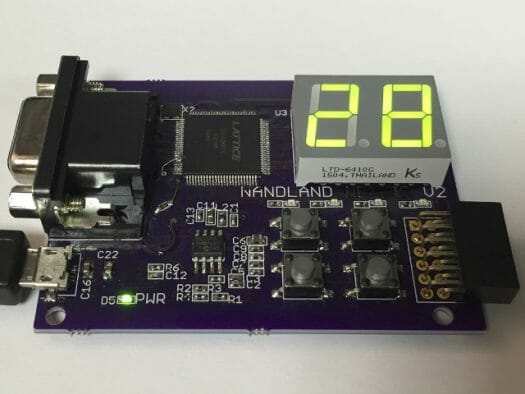 The board will be programmed using Lattice Semi iCEcube2 design software, and dozens of tutorials will be provided specifically for the Go board, including some of the examples showcased in the crowdfunding video.

Russell Merrick, the board designer, has launched the project on Kickstarter where he has raised close to $4,000, and reached the low $1,000 funding target of the project with 75 backers. A pledge of $50 should get you a Go board on February 2016. Shipping is free to the US, but you’ll need to add $10 to the rest of the world. Even if you’d like to give the board a pass for now, you may still want to have a look at nandland.com website if you are interested in learning more about FPGAs.