Until a few years ago, most development tools for micro-controllers were only available for Windows, but as Linux gained popularity among developers and engineers, community of developers designed development tools running in Linux, but only a few companies are providing tools that run on Linux operating systems. The good news is that STMicro has just announced the release of STM32CubeMX configurator and System Workbench for STM32, for both Linux and Windows, with Mac OS supporting coming on Q2 2016.

Developped by Ac6 embedded systems company, System Workbench for STM32 relies on Eclipse IDE, supports the ST-LINK/V2 debugging tool under Linux through an adapted version of the OpenOCD project, and can be used with various STMicro STM32 boards including Nucleo boards, Discovery kits, and other Evaluation boards.

You can give it a try by visiting OpenSTM32 Community, but for some reasons they ask you to register before accessing the installation instructions. If you already have a recent Eclipse installed, and you easily , and otherwise the best way is to use the installer (install_sw4stm32_linux_64bits-v1.3.run) that will install all required components. 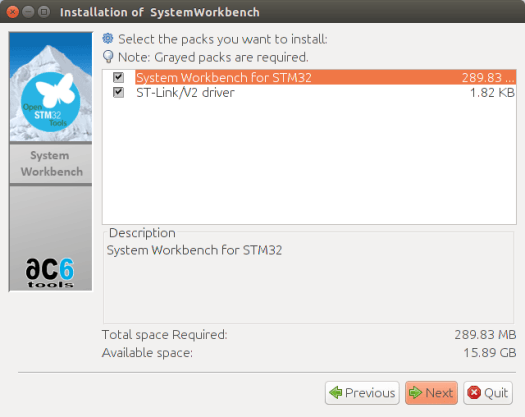 You can then launch Eclipse that you should be installed in ~/Ac6/SystemWorkbench/eclipse.

Developing for stm32 on Linux was already possible since few years. That was only a matter of configuration with eclipse, arm gcc and openocd.
And as long as stm32 workbench miss some features like reset button, using traditional eclipse still being a good option.

Will this work on all platforms, or just Intel x86? Microchip’s MPLAB X IDE works on Linux, but the XC8 compiler it uses will run only on x86 machines, so you can’t use it on any ARM-based PC. I’m wondering if the same is true in this case.

@jimg
It’s unlikely they’ve ported the IDE for ARM, as few people are currently using an ARM machine for development.