Embedded Pi is a platform capable of interfacing the Raspberry Pi with 3.3V and/or 5V Arduino shields, based on an 32-bit ARM Cortex M3 STMicro STM32 MCU. It can also be used in standalone mode as an Arduino compatible ARM MCU evaluation board. 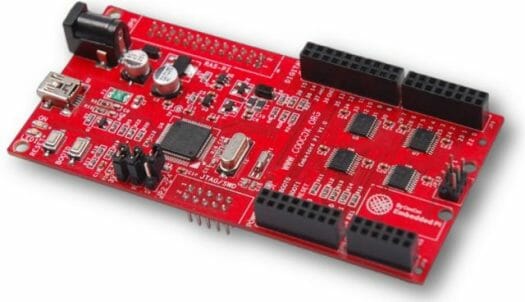 Embedded Pi Hardware Specifications:
Depending on the jumper placement on the Embedded Pi, you can select each of the three modes of operation: 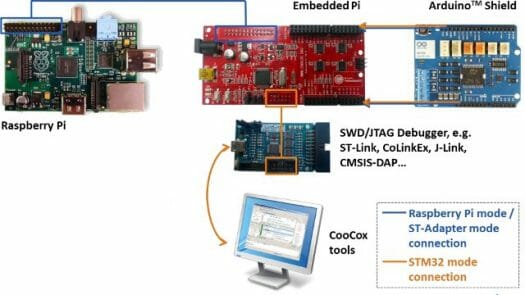 Development can optionally be done using Coocox development tools such as CoIDE that works with Windows XP SP3/Windows Vista, and Windows 7 computers.

Embedded Pi can be purchased for $34 on Newark/Element14 website. However, if you plan on using it with the Raspberry Pi and Arduino shields, this new board competes directly with the single board solution provided by UDOO boards, which costs only slightly more than an Raspberry Pi + Embedded Pi solution.

Any idea about shipping charges? (There doesn’t seem to be a way to check them without registering…)

Anyway, since this is a Chinese product, it could end up on DX etc 🙂

@onebir
Element14 is a pain for that, so I normally use the White House address with a test credit card to find shipping information, but all I get is:
“Your tax and shipping charges are currently not available. These charges should appear on your order confirmation email and/or invoice.”

It’s kind of funny they basically say: “you have to purchase first, and we’ll tell you the shipping charges later”.

Embest is part of Element14, so I’m not sure it will end-up on DX or Aliexpress.