When Samsung announced Exynos 8890 processor, it promised 10% lower consumption and 30% high performance compared to Exynos 7 Octa. The company also said it make its own custom ARMv8 cores for the new, but at the time details were limited. Anandtech has now published more information, and Exynos 8890 octa-core processor will make use of four Exynos M1 custom cores combined with four low power ARM Cortex A53 cores, combined with a Mali-T880MP12 GPU. 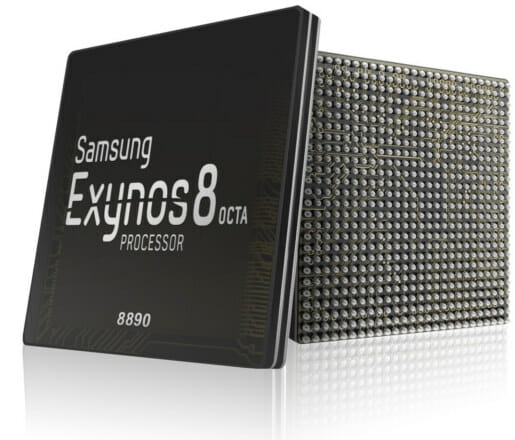 Now that Samsung Galaxy 7 has been announced with Exynos 8890 processor (at least one of its versions),  as well as LG G5 with Snapdragon 820 processor using Qualcomm custom ARMv8 Cryo cores, benchmarks have also started to show up.

The two new processors are usually performing much better than last year devices in benchmarks except for graphics where the Apple A9 processor found in iPhone 6s still performs better, and somehow Galaxy Note 5 (Exynos 7 Octa) achieved a better than LG G5 in Vellamo Browser. There’s however a good reason for iPhone 6s out-performance here as its screen resolution is 1920×1080, while the new models have higher resolution (2560 x 1440). Luckily Anandtech has the good idea of running offscreen tests instead of on-screen ones, and the results are quite different. 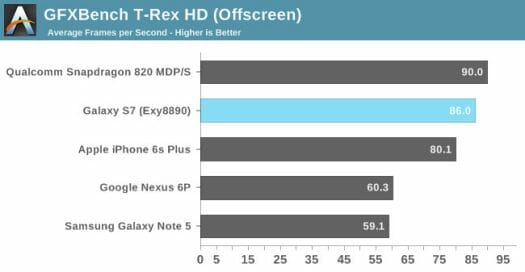 It should be  noted that MDPs (Mobile Development Platforms) can somtimes deliver better performance than smartphone due to better cooling. AnandTech also noticed that both Snapdragon 820 based LG G5 and Exynos 8890 based Galaxy S7 smartphones got pretty warm after testing.

More details about the processor should eventually be found on Samsung Exynos microsite.