This morning, I saw Kodi installed from Google Play get an update in one of my Android device, and that means that Kodi 16.0 “Jarvis” has now been released. As usual it’s available for Windows, Linux, Mac OS, Android, and iOS, with specific Linux ports for Raspberry Pi boards, and several Freescale/NXP i.MX6 boards such as Wandboard or EzeeCube. 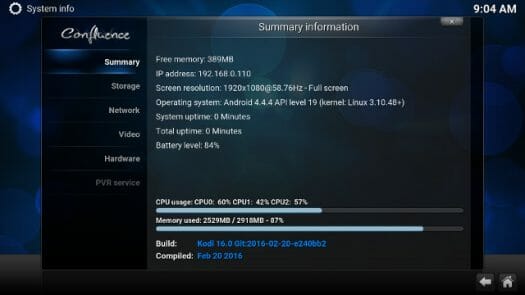 You can get the full Changelog in the Wiki, but some of the main changes against Kodi 15 include:

If you have installed Kodi Android via Google Play it should have already upgraded automatically, or will do so soon, and for other platforms, you can get Kodi 16 from the download page. Kodi 16 Jarvis  source code now has its own branch with will get bug fixeds with 16.1 and maybe 16.2, and development (master branch) has now switched to Kodi 17 (Krypton).

Another recent development is that Kodi developers have taken a harder stance against companies abusing Kodi trademark, either by making money selling “Kodi” devices with pirated movies, misrepresenting Kodi (e.g. “Kodi box” with custom firmware), or violating the GPL license. You can report companies that misbehave here.

Thanks to Harley for advance notice.