It’s fun to report about the latest gadgets, but sometimes it can be a good idea to look back at older devices to find if there are any good deals out there. TV boxes and sticks based Rockchip RK3188 quad core Cortex A9 processors were clearly the most popular in 2013 and early 2014, and in many respects their performance is still quite similar to the one of recent 64-bit platforms barring new features such as H.265 and 4K video capabilities. The good news is that you can now get RK3188-T TV sticks such as CX919 or MK809IV with 2 GB RAM for about $30 shipped. 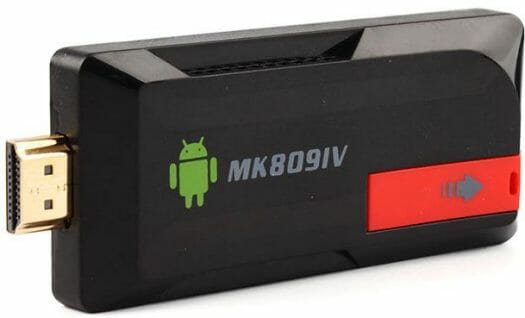 CX919 and MK809IV are very similar specifications, except CX919 comes with an external antenna [Update: MK809IV also has a retractable antenna, see red slider on picture above]:

If you’d rather use a custom ROM for the sticks, there’s a Finless ROM for CX919, and some alternative firmware are also available for MV908IV, but you may have to verify which WiFi module it is based on (Realtek or Ampak).
Beside the link to BuyInCoins above, you can also find the sticks on on Aliexpress, and Amazon US.

Thank to Onebir for the article idea.

What’s the highest-performance Android box or stick to use as a very lightweight desktop replacement (not HTPC) ? I have a Minix X5 and G4, but those are way too slow for anything serious. The S905 seems well behind the curve on the CPU side too.

I’m tired of getting entangled in Windows problems for people who’d be just as well served by Android. What should I set them up with ?

I’ve an old stick (MK808B) that has been collecting the dust for years. I’ve experimented with a few custom roms (including Finless’), and although it was a bit better than the stock rom, I couldn’t use it as a dedicated device for Kodi (due to stability, heating, wireless performance, etc). These sticks don’t come with a remote control, so it’s a hassle. If you’re patient and search deals at sites like Slickdeals, you can get a great device like the Nexus Player for $25. It comes with a remote control, is supported by Google (gets OTA updates, etc), and Kodi… Read more »

@A.B.
1) are those $25 available globally?
2) These 2GB sticks may be better for a few niches (eg headless use as a local linux server).

@onebir
Those aren’t available globally. I don’t know about other countries, but those deals are available in the US from time to time. Slickdeals can even alert you when there’s a deal. There was a time when Chinese sticks/boxes were hot, but after most people realized those were buggy and unreliable, they opt for better products that are available locally.

@obarthelemy
Rorkchip RK3288 is the fastest processor in widely available Android TV boxes. Otherwise Amazon Fire TV 2015 and Nvidia Shield Android TV box will even be faster, but they are not always easy or cheap to buy depending where you live. Xiaomi Mi Box 3 Enhanced will also have a fast processor, but you’ll have to hack the system to change the language from Chinese to whatever you want.

It easy to say that there’s no love from software developers towards some SoC manufacturers, esp. Rockchip and Allwinner. I understand that there was no proper cooperation between them, but still, I’m happy there are manufacturers who are willing to provide functional quad core systems, based on f.e. Allwinner H3 (9.99 $) or older Rockchip devices. As you wrote, these are inexpensive and available worldwide, and as such, could fullfil demand for cheap computers among those who can’t afford the best solution. It’s sad, that even with such demand there are no reasonable financial channels to encourage such cooperation between… Read more »

@Jean-Luc Aufranc (CNXSoft)
Thank you for the info !

Last time I bought a rk3188 stick with 2GB RAM that you recommended on this site, I got one with only 1GB RAM. 🙁

FYI, due to unstable media decoding the Rockchip SoCs are still not recommended for Kodi/XBMC.