You may remember SPMC (Semper Media Center), a fork of Kodi/XBMC, was released a few years ago to fix some issues with Rockchip processors that would not make it to Kodi mainline code. Koying, the project’s developer, has now forked Kodi 16.1 to add some bug fixes and experimental features, and released SPMC 16.1.1. 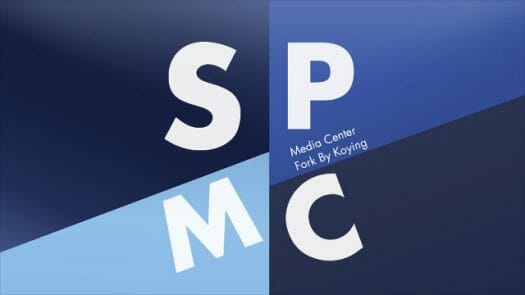 Bear in mind that Koying’s main hardware platform is Nvidia Shield Android TV box, so this particular device is most likely to get the best support, but Amlogic devices and Amazon Fire TV could also get some love.

You can try SPMC 16.1.1 on any Android 4.2 and greater devices by downloading the apk for ARM or x86 on SPMC website, and soon on Google Play. The source code can be found on github, which Koying also uses as a bug tracker.

Thanks for the head up.
The splash has changed, though:

Koying :
Thanks for the head up.
The splash has changed, though:

So this will work better then regular Kodi on my Shield? Thank you for everything you do.

Android TV recommendations and voice search (experimental)… I need to test this.

Did you figure out how this works?

Is it possible to test SPMC parallel to an existing Kodi installation?

@koying
Great work and thanks. But why is there Nvidia (Tegra) and Amlogic love but no more Rockchip love ? They need love more than nvidia/shield 🙂

My Gigaset QV1030 (Tablet with Tegra 4) don´t work with it, …prepare for first run… and then only a black screen, is there a solution for my device?

Because RK is just too hard to work with 😉
Nothing is open-source on their side, so it’s awfully time-consuming to get something working by trial and errors, and I’m not confident with using a binary lib I have no clue about, zidoo style.

Great. But does it work on all S905 devices or only Minix & Wetek?

This requires AML patches. Whether they would be integrated in other boxes depend on the boxes vendor, I guess.

Hello, I tried SPMC 16.1.1 on the S95 Meta. I am testing to find a version of this or any Kodi or derivative that allows the S95 to play DTS without audio dropouts. I use a single file(a movie trailer) to test, because it always produces the dropouts within 3 passes. The only version that I have not experienced the dropouts on is a Kodi 17 nightly(3/11?). 55 passes of the file and not one dropout. Of course as a nightly, some issues are expected, and though encouraging, my test is anything but conclusive. I have not tested the other… Read more »

@koying Any news about support for Blu-ray 3D / H.264 MVC videos on Nvidia Shield TV or other Tegra devices with Android? Karl Johnson :So this will work better then regular Kodi on my Shield? I read that SPMC is now actually recommended over Kodi for Android since Koying is no longer acting as lead developer of mainline Kodi Android, at least until upstream Kodi gets a new lead developer who can step up to maintain Kodi for Android mainline. Francis Belanger : Android TV recommendations and voice search (experimental)… I need to test this. Yes, voice search does sound… Read more »

Thanks, been waiting for this!
Great work as always, Koying.

@koying Koying : @Hulk Hogan Because RK is just too hard to work with Nothing is open-source on their side, so it’s awfully time-consuming to get something working by trial and errors, and I’m not confident with using a binary lib I have no clue about, zidoo style. It seems to me that for the video HW support is working well with the Tronsmart r28 meta (RK3288). The only thing not working is the HDMI bitstream passthrough. In the 15.2 It was partially working, now is not working at all. Is the chip managing the HDMI part of the SoC?… Read more »

How well will this work on the Nexus Player?

Can someone explain how the voice commands work please? When I use my voice remote from within spmc I just receive the usual Google and youtube results! It does say getting results from other applications but nothing is apparently returned. Would be great to have this and recommendations working on my shield TV. Cheers

Jason Keen :
Can someone explain how the voice commands work please?

Do you have SPMC already running? It has to currently…

@koying Yes I load up SPMC and then use the voice remote and say the name of a movie. This is registered and results are returned from Google and youtube. Should results also be displayed for matches in my kodi library? Cheers

Here is an old (Kodi) quick vid on how it should look: https://www.youtube.com/watch?v=qBLHb05Tpeo
If it doesn’t, please open an issue at https://github.com/koying/SPMC/issues to discuss further

Thanks Koying, I will take a look when I get home from work 🙂 Cheers for taking the time to answer my query, you have done an awesome job with SPMC. I have a 4K Panasonic TV and when using Kodi 16 it would continually reboot itself when pausing a movie and moving back to the Kodi main menu. I guess it was something to do with refresh rates but SPMC does not do this which is great 🙂

1. Couldnt see the files on my old thumb drive when plugged into the Shield. 2. My micro sd card is somehow read only now grr… hence unable to copy and paste SPMC file to SD card. No luck trying to remove the read only status and I dont want to reformat card. uggh,. Any idea when this will go up on Google Play store? lol!! 🙂

So looking forward to setting this up.

Can the Android TV voice search interface be used (perverted) into allowing voice typing in Kodi? Like, somehow it sends a search query from voice search to Kodi, and Kodi receives it and injects the query as typing in a text entry field. Is that even possible?

I got a 500gb nvidia shield tv with the jarvis update after a movie or tv show plays for like 16min more or less the movie or tv show pauses like if i pressed pause and i habe to press play again it does it on kodi16 and spmc 16.1. But not on spmc 13.4 it works perfect im running tvaddons.ag but it doesnt matter what build i use it started happening when i updated my shield to marmallow and kodi to jarvis also if i go back to isenguard it does the same thing im running 30mb internet

SPMC / Android split looks quite serious though: http://forum.kodi.tv/showthread.php?tid=264310, as it could mean Kodi 17 won’t support Android, unless they find an Android maintainer.

Is this suitable or better than Kodi for FireTV

@Ian Its overkill i mean KODI can only use so much hardware so this s more if you want to play games at the same time and play kodi to fire tv is more tv then gamer.
Id love to know if this voice search would work on the fire tv as well?

What skin do you recommend I have a 4k tv?

Hi just to say thanks for the outstanding work with both kodi and SPMC I know that this is probably a bit early to ask but are there plans for your version of krypton seen some of the hipe on YouTube and the so called speed of 17. I’ve downloaded a nightly 27th March and the default skin is still confluence I’ve looked for the new skin but failed to fined anything other than confluence and one other that failed to install couldn’t get much to work so I uninstalled it lively.. However left a little confused as the krypton… Read more »

I have a problem with SPMC 16.2 with the pvr.stalker client loading in 16.2 I get authorization failed error. Is there any way to fix this. Also same with Kodi 16.1

Koying :
@Hulk Hogan
Because RK is just too hard to work with
Nothing is open-source on their side, so it’s awfully time-consuming to get something working by trial and errors, and I’m not confident with using a binary lib I have no clue about, zidoo style.

I Koying i have a older RK, and it still plays.
Can you tell me if spmc 16 will work on it ?
Or witch is your spmc version that will play on it?
Thanks for you work

Hi Koying just a quick question regarding hevc support on nvidia shield TV. In the future is it likely that 12bit hevc will be supported by kodi/spmc? 10bit works fine but 12bit just plays audio with no video shown. Cheers

What does it mean by “basic bluray 3D iso”? does that mean if I have a ripped 3D bluray movie and a 3D tv and the right cables going between it can display 3D movies on my tv?

I have a Minix Neo X7 (which uses the RK chip). I installed the 16.1 version of SPMC for the Rockchip. All works fine except for one thing: I cannot get the TV tab and live TV going. The only PVR addon visible is Stalker and this cannot be enabled. I downloaded PVR simple (version 1 and 2) and also can’t these enabled…

Is there a relatively simple fix for this?

I am trying to learn how to use SPMC. I figured out how to change the skin on the fork. I want to install a build on SPMC, but I don’t know what version of a build to install. Do I use a build version 16.2 or build version 17.3 on SPMC.
Thank you!

Using latest SPMC on latest Shield TV. DVD ISO files are freezing/pausing when moving to the next chapter. Also drops some seconds from the playback while this is going on. This is only happening on the Shield. PC and Fire devices play normally. I’ve fiddled with the settings as much as I can, and nothing seems to change it. Any ideas?