Do you remember VoCore? It was a low cost OpenWrt WiFi IoT module based on Mediatek RT5350 processor, that had a very successful crowdfunding campaign managed by a single developer, and the project is still going strong with VoCore2 being in the works. Another developer had the idea of doing something similar but based on HiSilicon Hi3518 ARM9 processor with more memory and support for 720p video encoding making it suitable for HD drone camera, compact video cameras, and so on. Meet RobinCore. 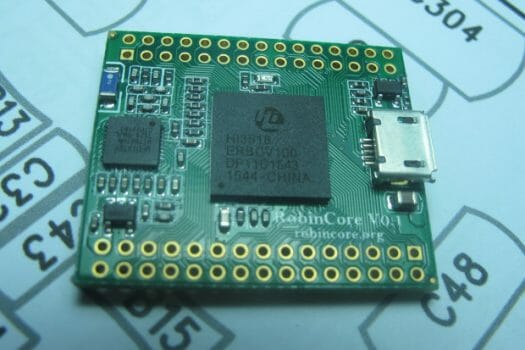 The board runs OpenWrt 15.05 with Linux 3.18 or HiSilicon Linux SDK with Linux 3.0.8. The developer has already released some binary images and script, as well as documented is progress on RobinCore.org. Source code has not been released, but he plans to submit patch files to OpenWrt trunk  for hi3518e soon. I’ve been told HiSilicon SDK normally costs $10k – at least outside of China-, but the developer confirmed by email that he obtained HiSilicon SDK and documentation from an authorized agent of HiSilicon, and as well as H.264 video library and API. He also claims to be releasing PCB layout, schematics, documents and full source code for U-boot, the Linux Kernel, OpenWrt, and applications such as the RTSP server, and DVR program if the campaign is successful. 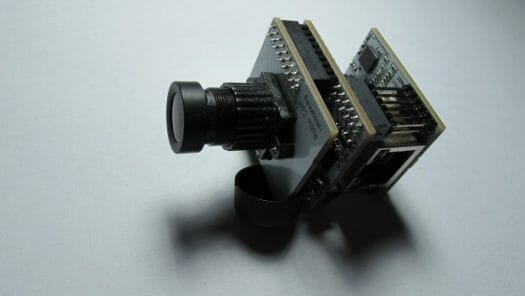 Two add-on boards (aka docks) have also been developed:

As you can see from the picture above both boards can be connected together to RobinCore.

The project has now launched on Indiegogo (fixed funding), where Robin, the developer, aims to raise at least $7,000 to go ahead with production. A $15 pledge should get you RobinCore, $20 RobinCore with RobinMac dock, $25 RobinCore with RobinCam dock, and $30 the board with the two docks. Shipping adds $3 to anywhere in the world, and delivery is planned 2 weeks after the campaign ends, so around June 2016 with a production run for 500 units.

Can you use it as a USB gadget?

Nice! I really hope i can use this to make my xiaomi yi ant cam to work better. And that it fits my dummy camera casing (so its waterproof).

@Zoobab Do you mean you can use it as a usb web cam? No, because the usb is routed to an usb tty module. The schematic is on his web site.

To the best of my understanding the ISP and camera drivers and software are copyrighted. I tried to obtain info from HiSilicon about some of there products – horrible experience.

I wouldn’t recommend to anyone dealing with with those IP camera chip manufacturers including Grain Media etc. They do not comply with GPL license, many of the drivers and software are copyrighted, no warranty on chips, demand high quantities, purchasing of insanely expensive kits etc.

It’s quite possible the company has a different policy for mainland China companies and overseas companies.

@Jean-Luc Aufranc (CNXSoft)
a whole IP camera module with Hi3518E is about 6 USD on Taobao.

Is it possible to install the OpenWrt linux version on other Hi3518E based modules?

It is a full set with the OV9712 sensor and Ethernet connectivity for less than $16.5 (free shipping).

Is there any ready to buy camera based on MT7688? I cant read Chinese .