A group of researchers of the Future Interface Group, Carnegie Mellon University in the US, has worked on SkinTrack technology which enables continuous touch tracking on the skin by using a ring emitting high frequency AC signal, and a sensing wristband with multiple electrodes. They’ve created sensor band and ring prototypes to demonstrate the technology. 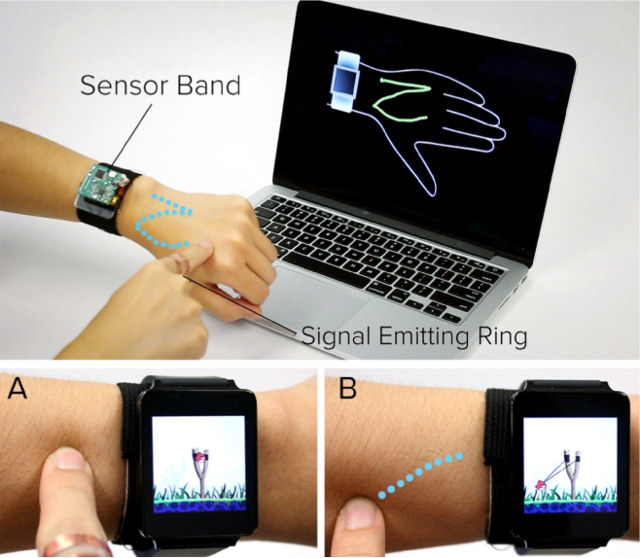 The ring includes an oscillator that generated a 80Mhz sine wave at 1.2Vpp. It consumes 7mA during operating meaning that they could get 15 hours out of the 100 mAh battery used in the prototype. The wristband features four pair of electrodes coupled with AD8302 RF/IF gain and phase comparator chips in order to derive X and Y coordinates from the phase of the signal. 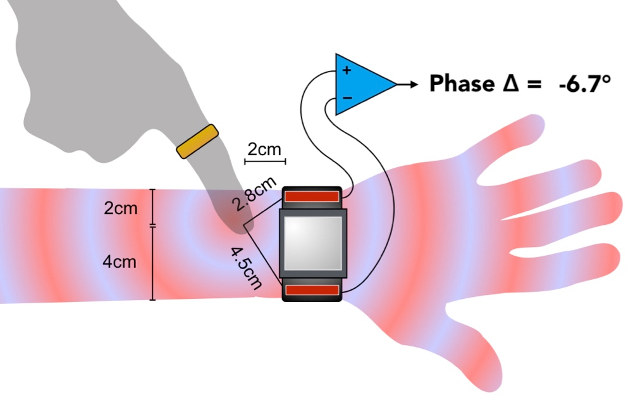 The sensing board produces eight analog values which are sampled by Atmel ATMega328 microcontroller’s 10-bit ADC inputs, and transmitted to the watch using a  Nordic NRF8001 Bluetooth Low Energy (BLE) chip about 30 times per seconds.

The video below further explains how this works, and demonstrates potential applications.

For more technical details you can read the research paper, or head to SkinTrack page. If you are interested in this type of alternative user interface, you may want to scroll down for other user interface research projects such as SweepSense using headphones or speakers, or FingerPose for three dimensional touch screens.

Via Liliputing and Geeky Gadget.

Seems great. However, there is a significant delay. Why?