Debian on DragonBoard 410c Development Board
Skip to content

I purchased Qualcomm DragonBoard 410c development board last year, and first tested it and run some benchmark on the 96Boards compliant hardware with Android. I found that it was still work-in-progress, and decided to wait before trying Debian on the board. I’ve now done so, and will report by experience installing Debian Linux, playing with the board, and running Phoronix benchmarks to compare it to other ARM Linux boards.

The first challenge is to navigate through the documentation that is not always clear or up-to-date. I eventually ended up on DragonBoard 410c Wiki on Github. 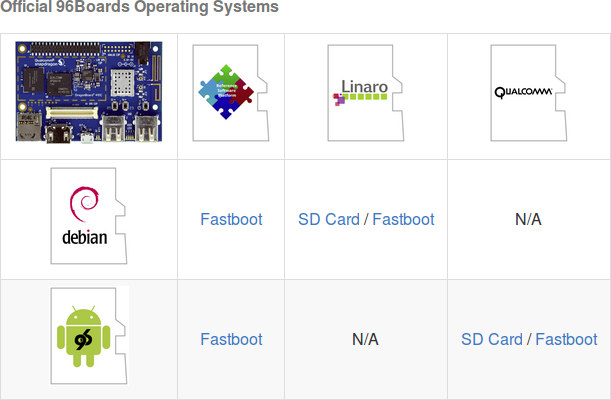 You then have to decided which image you want. While there are two official operating systems with Android and Debian, you can three “entities” releasiong their own images. For Debian specifically, you have the Linaro image, and Reference Platform Build (RPB) image. I could not find any changelog or known issues with the former, but the latter as its own Wiki with the latest release being RPB 16.03 (March 2016), and the next one scheduled to be RPB 16.06 in June.

USB host not working did not inspire confidence, so I first tested the Linaro image. The (other) Wiki points to the “latest version”, but the link would point to Linaro Debian 16.02 release, while I could find a more recent Linaro Debian 16.04 which I downloaded in a terminal:

I used a micro SD card to install it. If you use Windows, simply use Win32DiskImager, but in computer running Linux or in Windows via Windows subsystem for Linux, you may want to do it in the terminal. First check the SD card device with lsblk. Mine was /dev/sdb, but your may be different, and I use /dev/sdX in the command below tp flash the Debian installer to a micro SD card:

Now remove the micro SD card from your computer and insert it in to the board, set the jumper to boot from SD card on the DragonBoard 410c, and connect the power. I could see LED 1 blinking, but nothing on my HDMI TV. Last time, I did not  manage to make the serial console (requiring a 1.8V USB to TTL board or cable) using Hardkernel ODROID board, so I went to the support forums, and after several minutes of reading, I found that the RPB image is recommended, as well as a clear explanation between the Linaro and RPB images:

The reference platform will run on all 96boards CE (Consumer Edition) and EE (Enterprise Edition), while the Linaro image is built specifically for a given board, and they are not really working on it. [Update: This answer was specific to Hikey board, and for DragonBoard 410c there are two images provided by Qualcomm Landing Team and the Reference Platform team]

So let’s start again from scratch using the RPB image, and download the bootloader, Linux kernel and rootfs to my Ubuntu computer:

.. and check the device is detected:

Good. After making sure the jumper switch is set to 0000 on the board again, we can  extract the three files, and install Debian as follows:

That was a lot of commands to install the operating system… Now you can unplug the board, remove the micro USB cable, and connect the power again. After a few seconds, you should see the kernel log, and eventually LXDE desktop environment.

You’ll be asked to configure WiFi, and you’re basically done.

I’ve then run a few command to learn more about the image and system:

One of the main advantage of 96Boards should be recent Linux version,and that’s exactly what we have here with Linux 4.4 running on the board. Out of a total of 866MB reported RAM, 64MB is free, and the 6.9GB rootfs has 4.8 GB available to the user. Snapdragon 410 SoC is correctly reported as being a quad core Cortex A53 (0xd03) processor.

I used file utility to make sure a 64-bit rootfs is being used here:

Finally, there’s a bunch of modules pre-loaded on the board:

The thing that often do not work on ARM Linux board are 3D graphics and hardware video decoding, so I’ve specifically tested these two, and also played with the pre-installed Chromium browser.

So that means both framebuffer and X11 3D graphics acceleration are working. Nice !

I also tried to play Tuxracer as it was part of the board’s test results provided by Linaro.

It works, but it’s so slow that it’s barely playable (see video below).

I installed VLC to play 1080op h.264 videos, but based on the CPU usage the system is clearly using software decoding, and there’s no audio via HDMI. I’ve asked about those two issues on the forums about 24 hours ago, but I have yet to get a reply.

Chromium loads OK, but I did notice some freezes during use, and YouTube will struggle at full screen at 1080p, in similar way to many other low end ARM Linux platforms.

…and run some benchmarks to compare against other development boards:

After over 3 hours the results are in. Bear in mind that the board does not have heatsink, just a metallic shield, and this may affects the performance. It’s also running an OS with a 64-bit ARM rootfs, while platforms like Raspberry Pi 3 features a 64-bit processor running 32-bit code.

I like to check John the Ripper for multi-threaded performance. 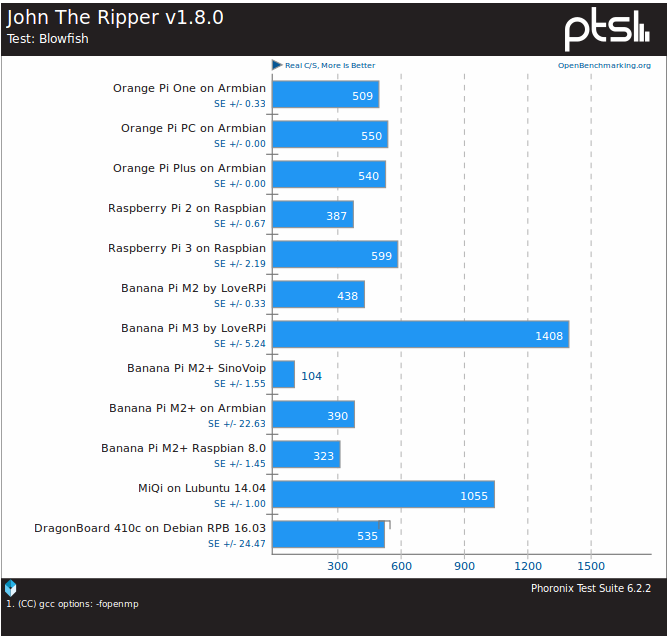 While FLAC audio encoding is nice to single threaded performance. 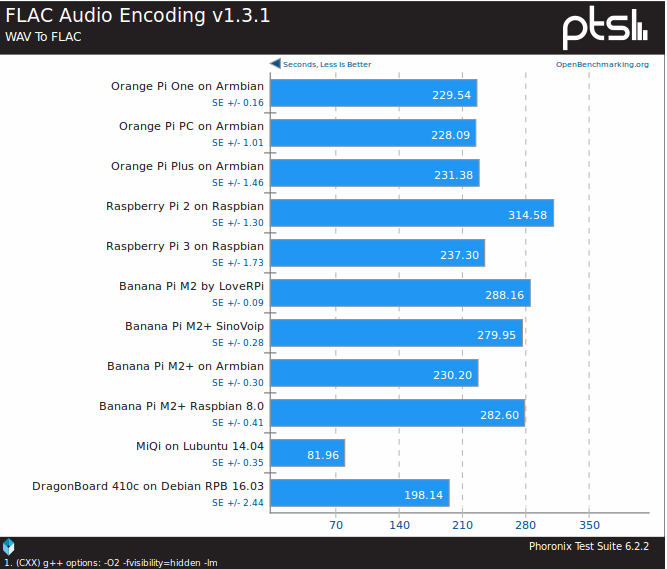 In theory the CPU performance of Snapdragon 410 and Broadcom BCM2837 (as found in RPi 3) should be equal since both are quad core Cortex A53 processors @ 1.2 GHz, but for some reasons DragonBoard 410c is a little slower in the multi-threaded benchmark, and quite faster during FLAC audio encoding likely due to software differences (Aarch64 vs Aarch32).