If anything is clear from having walked around this year’s Computex, then it is that the mini PC is here to stay. Beyond plenty of socketed boards using Intel’s new STX form factor from just about every vendor, there are also plenty of other mini PC’s on display. One that caught our eye at the show was ECS’ new Liva, tentatively named the Z. 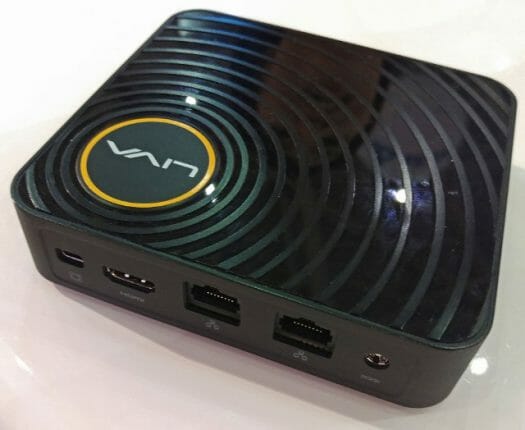 The following specifications were revealed by ECS:

It’s so far the only Intel Apollo Lake system we’ve spotted at the show and it looks like we’ll get both Celeron and Pentium branded Apollo Lake SoC, just as with Braswell. As far as the Liva “Z” goes, ECS has gone all out in terms of connectivity this time around, but it also shows when it comes to the overall size, as although it has a lower profile than the past generations of Liva systems, it’s gained quite a lot in width. An interesting feature to note is that this system has a pair of Gigabit Ethernet ports, as well as a slot for an M.2 SSD in addition to the on-board eMMC.

No word on availability or price, but it won’t be until after Intel officially announces the Apollo Lake SoC.

I’m just starting to build a HTPC, but I didn’t buy the motherboard yet. I was planning to buy a Asrock mini-itx with a braswell J3*** SoC (didn’t decide which one yet). Should I wait for the apollo series, should it has big enhancements. I’m especially interested in the cpu power/electricity consumption.

2x DDR3L SO-DIMM’s = dual channel memory operation hopefully. With USB3 support and 2 x gbit NIC, this looks interesting. 802.11ac is a must these days in crowded areas like apartments.
If the price is low, i’ll strongly consider this one.

@Roel
It’s supposed to have much better hardware media codecs, but the rest is likely to be quite similar. It’s not know what processors Intel are planning to release at this point though, so it’s hard to say what other improvements there’ll be. Don’t expect any huge power improvements though.

fossxplorer :
If the price is low, i’ll strongly consider this one.

2x Gigabit Ethernet. This thing is asking to be your next router/firewall.