BBC recently distributed micro:bit boards to UK schools to get student interested in electronics and help them learn more about this subject, but so far it was not for sale to the general public, but this has now changed since the British broadcaster now launched the board for 13 GBP (~$19) via Element14/Farnell and others distributors. 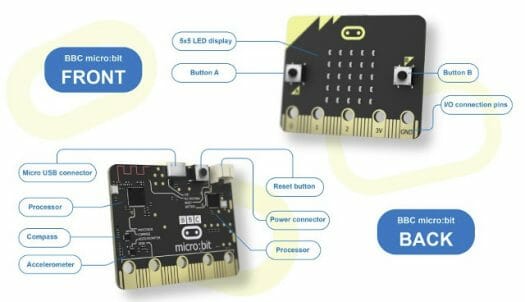 The board is powered by Nordi Semi nRF51822 SoC with ARM Cortex M0 micro-controller and Bluetooth LE connectivity, features motion sensors, plenty of LEDS, a few buttons, a micro USB connector for power & programming, as well as a header for LiPo batteries.  There are various ways to program the board either interpreted languages such as Python or JavScript, or graphical drag and drop programs such as Microsoft Block Editor. All technical details and example projects available on Micro:bit official website.

Beside the board only, several kits are being offered included micro:bit Go with a USB cable, battery holder & 2x AAA batteries, and a Quick Start Guide, micro:bit Club with 10 “Go” kits, and each reseller seems to have its own kits.

Element14 only accept orders over 90 units, so if you just want to play around and pre-order one or two, you’ll have to go through smaller UK distributors such as Kitronic, Pimoroni, or Technology Will Save Us that also sell the board for 13 GBP ($19),  and kits for up to 37.50 GBP ($54).

Even though there are only British resellers, you can buy the board from anywhere in the world. For example, micro:bit will sale for 16.33 GBP ($23.70) shipped to Asia on Pimoroni. Shipping is scheduled for July.

Typical British overselling and (“its for children’s’ education”) hype, just like RasPI

Software development and educational support cost money. How much schools software is there on the Orange Pi, and what support ecosystem for the classroom. How is the web based IDE for it that lets you teach programming, develop code in a browser, and just drag and drop it onto the device which has mounted as a mass storage device? Can you take a class of kids from no coding experience to writing code in a supported manner on the Orange Pi? The Micro:bit and Orange Pi are aiming at vastly different markets. The Micro:bit is probably more like an easier-to-program… Read more »

The micro:bit website is as important as the hardware : https://www.microbit.co.uk/

It’s still very expensive if they’re expecting schools to be willing to purchase it and give it to their students. Sure, they gave a million of the boards away, but then what?
Can anyone here seriously see schools in the developing world buy this to give the kids there a head up in the technology world? I can’t, not at this price anyhow.

There is nothing new in web based software nor tools which already existed for many years … The hardware seems to have been developed by an accountant – Given the choice of devices available in the market (and the bloody ages it took to design such a simple board).. Teaching programming is not blinking a few LEDS from a veb IDE to give the kids false confidence (and we have many of those here in UK) . This is nowhere close to a “structured teaching” of programming. it the usual fluffed-up hype – Good teachers don;t need this (nor the… Read more »

Can you load code on the Microbit with the Arduino IDE? I used it yesterday for coding on some ESP8266, it really helps when everything is just copy/paste/compile/flash.

@Lalith When learning to walk, do children need a structured teaching of physics, anatomy and physiology, or do they need to just try some things and fall over a lot? How about learning to speak? Do they need to be instructed in the anatomy and acoustics of speech? How about a thorough grounding in linguistics? Or, do they just need to spend ~12-24 months of babbling, crying, listening, observing, and being talked to? I’d suggest that programming isn’t all that different. There is a time and place for more structured and rigorous instruction. Before that though, giving kids a chance… Read more »

For most people this isn’t worth the money, like the original RasPi wasn’t. Both projects seem to have many followers though who post nonsense to defend their uk made/designed thingies. I think these projects are mostly about the rest of the world subsiding free education (or “education”) for the uk schoolchildren.

eas : @Lalith When learning to walk, do children need a structured teaching of physics, anatomy and physiology, or do they need to just try some things and fall over a lot? How about learning to speak? Do they need to be instructed in the anatomy and acoustics of speech? How about a thorough grounding in linguistics? Or, do they just need to spend ~12-24 months of babbling, crying, listening, observing, and being talked to? I’d suggest that programming isn’t all that different. There is a time and place for more structured and rigorous instruction. Before that though, giving kids… Read more »

Ugh. This is what happens when you let Big Government try to do something.

Does seem quite expensive for a dev board with these specs, already being produced for schools in large volumes. I expected <$10.

Micropython as a prefered nerdy IDE.

Going to Canada next