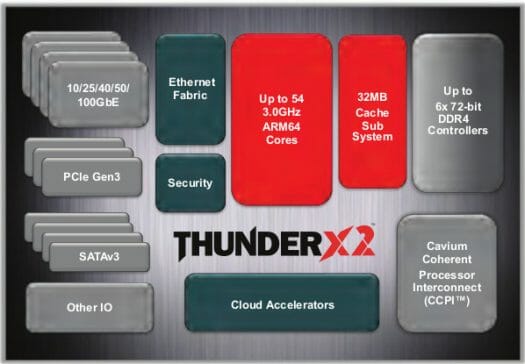 Key features of the new server processor include:

Just like for Cavium ThunderX, four revisions (SKUs) will be provided to match specific requirements, with all support 10/25/40/50/100GbE connectivity:

The processor complies with Server Base Boot Requirements (SBBR), UEFI, ACPI support), and SBSA Level 2, and will support Ubuntu 16.04 LTS and later, Red Hat Early Access for ARMv8,  SUSE SLES SP2 and later, CentOS 7.2 and later, and FreeBSD 11.0 and later.

Charbax interviewed the company at Computex 2016 in the 20-minute video below, where you can also see Gigabyte G220-T60 server with ThunderX with an Nvidia Tesla GPU (at the 7:20 mark) for “high performance compute applications”, and other servers based on the first generation ThunderX SoC.

It could not find when the SoC will be available. More details can be found on Cavium ThunderX2 product page.

Intel just released a benchmark of ThunderX vs Xeons: http://www.nextplatform.com/2016/05/31/intel-lines-thunderx-arms-xeons/

There’s also a recent preview article about a ThunderX based server at: http://www.servethehome.com/gigabyte-r120-t30-overview-first-cavium-thunderx-system/
IMO they’re somewhat intel-biased but they seemed quite pleased with this board, especially about IO.

@Bruce
That means Intel consider Cavium solution as a serious competitor then.
That’s a comparison to ThunderX, and ThunderX2 will be better, although I’m sure Intel new server SoCs will improve too.

Hmm, this looks great. Such a system with 2 socket would be something i might consider in the future.
I have my servers in DCs so power consumption is a factor.
And the AMD Zens for servers are coming next year. Desktop Zen pretty soon 🙂
Good for the competition.

At long last – a true server-class ARMv8 board. I got to have that Gigabyte.