Google might be working on Android or Brillo for Raspberry Pi 3, with a new repository created in AOSP, meaning that, if that’s Android,  you won’t probably get the Google Mobiles Services by default, but those can be side-loaded to get access the the Play Store, Youtube, etc… In the meantime, a group of developer have been working Android 6.0 TV port for Raspberry Pi 3. That’s the same team who worked on previous images for Raspberry Pi and Raspberry Pi 2 boards using “peyo” port, and that did not have any support for 2D/3D graphics acceleration, nor hardware video decoding. 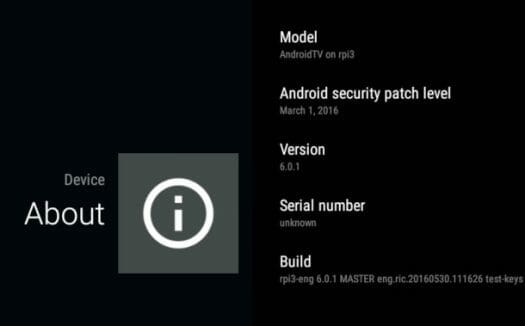 But they’ve made some improvements for their Android TV 6.0.1 release for Raspberry Pi 3, as 2D/3D GPU acceleration is enabled using the Mesa drivers, and Kodi user interface, game emulators, WelGL in Chrome browser all work relatively well using 1280×720 frame buffer resolution as you can see from the videos uploaded by Geek Till it Hertz and ETA Prime.

The downside is that you’ll need to side-load apps, and that hardware video decoding does not currently works, so 1080p videos won’t play smoothly. This will certainly change once support makes it to AOSP , but in the meantime you should not expect video playback to work very well in that image, but you’ll be better off staying in Linux if video playback is important to you. 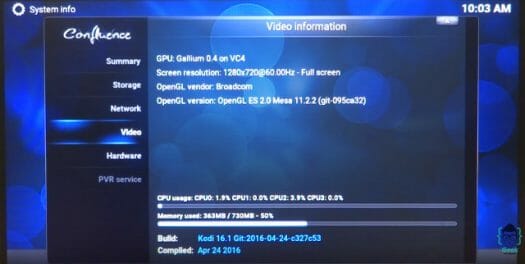 You can get the source code on github, download the firmware image (extract it and flash it with dd / Win32DiskImager), and post comment or ask question on the dedicated Google Groups thread.

A £30.00 s905, 2ghz TV box with Android 5.1.1 2gb RAM, 8gb ROM, case, power supply and remote still shows Raspberry Pi as a over priced over heating fudged board. At least with the s905 video works and kodi works, if you want gpio just use a Chinese clone Arduino.
Also you are safe knowing a s905 runs cooler, my minim8s mbox hardly breaks a sweat in antutu or 3Dmark and that’s at 2ghz and no Intel sized cooler or other Raspberry fool fudged heat sink. Not forgetting no sdcard access times to worry about on the s905.

“Google and the Raspberry Pi foundation has now officially announced they were working on Android for Raspberry Pi 3, ” Really? Got a link? Where’s this official announcement from the Raspberry Pi Foundation? Or from Google? Oh right, there isn’t one. All I’ve read is speculation and guesses based on the presence of a vaguely named repository, and the unofficial work of community members who have been working on cobbling together some version of Android for RPi over the last few years… Truth is, the Raspberry Pi Foundation doesn’t need (and I’m pretty sure, doesn’t want) an Android port, official… Read more »

We don’t have any information to suggest that there’s official work going on inside Google on getting AOSP to run on Raspberry Pi, but it’s certainly very exciting if true

So they don’t even know about it… They should not have re-tweeted that article….

@Jean-Luc Aufranc (CNXSoft) Ok thanks, for some reason I was expecting more than a single twitter posting given the amount of fuss being made over this. Perhaps the single tweet is a reflection of how much the RPi Foundation cares about official Android (ie. not very much, despite their polite and politically correct “we’re excited to see where this goes”). I still stand by my comment that Android on the RPi is unlikely to be the big deal it is elsewhere. Oh and by the way, this site is completely fsckd up now on Android tablets (Chrome, latest Marshmallow), continually… Read more »

@Jean-Luc Aufranc (CNXSoft)
Indeed, they should not, although from the Foundations point of view if Google want to port Android to the RPi they’re more than welcome, but I doubt anyone at the Foundation really cares (although it might lead to a few more sales). So far though, this all looks like 2 + 2 makes 5.

@Theguyuk
Cheapest 2GB S905 box can be found for less than $33 now. With free shipping and of course with decent power supply, remote, case and so on. RPi was always too expensive and little ancient.

Maybe I should write about it…

RPi have the biggest community! That overpowers anything new:-)

Interesting that they’re using Mesa/Gallium. That gives you OpenGL (ES), but no video decoding. I don’t know the status of getting that working. Don’t you have to buy a license for MPEG-2/4 decoding to work on the RPi?

@Jean-Luc Aufranc (CNXSoft)
Yes, please write about it if you have access to the device. I just ordered mine so I will be able to play with it after 3 weeks if there will be no shipment delays from China to EU. Actually I made a mistake because I needed analog audio but this box doesn’t have such socket. And I’m afraid it will not be possible easily to add jack socket because S905 limitations. It is pretty simple in H3 devices like Orange Pi One.

@goran May have biggest community but its scope/knowledge appears mainly limited to school & general education use. In absence of a Raspberry sales/tech support address, I posted a RPi2b pre-sale enquiry last year on what minimum power consumption to nearer Arduino levels for battery powered unattended data-logging by shutting off unused A7 cores & features like USB & HDMI, a moderator replied consumption is only 5 Watts, as if to say why try for less ! Quite apart from erroniously stating the RPi2 consumed more power than stated in the nearest thing to a RPi2b Specification at eLinux stating typical… Read more »

@goran
Another difficulty for those wanting to know how to reduce RPi2 power consumption, is I read the hardware is not open source – no schematics, and Broadcom won’t release the Datasheets on the RPi2 SoC – unlike Amlogic I read in a later cnx post today – but
@cnx has Amlogic released a full datasheet with table of consumption v S-States & Clock Frequency ?

The S905 datasheet is OK (304 pages), but bear in mind that product like Freescale/NXP i.MX6 or Texas Instruments Sitara processor also get technical reference manuals with thousands of pages, so documentation is likely to be more thorough.

@Ian Tester
The Broadcom SoC in the Raspberry Pi is sold with H.264 and MPEG-4 licenses, but you can to pay extra for MPEG-2 and VC1.

For some reason I’m getting the impression that @Theguyuk doesn’t like the RPi 😉 I expect the success of this will ultimately lie with the open source videocore drivers that eric anholt is working on. Without them I see little adoption. I think it will be interesting to see whether the community would get behind a fairly stable hardware platform and where that will take the android build and what uses it will be put to having access to a rather large apps base. This is compared to what seems like a disposable chinese tv box market where on going… Read more »