I’ve been reviewing several Intel Bay Trail, Cherry Trail, and Braswell mini PCs in the last year or so, and I always end up recommending Microsoft Edge browser over Firefox or Chrome for people wanting to watch YouTube videos, as the last two browsers always drop many frames with the video stuttering regularly. However I noticed that while Edge is playing  MP4/AVC (H.264) video, the other two browser would normally stream WebM/VP9 videos, and it could be the cause of the problem as H.264 can be hardware accelerated, but VP9 not, and the low power processor might not quite powerful enough to handle 1080p VP9 video decoding smoothly.

So I investigated the issues with Vorke V1 mini PC powered by an Intel Celeron J3160 processor (6W TDP) with the three browsers by first checking enabled codecs in YouTube HTML5 page. 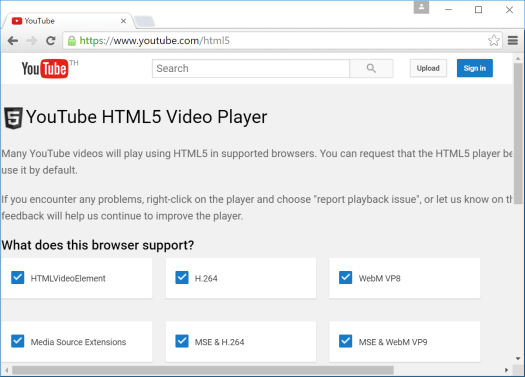 I’ve selected a video and played it in Edge, Firefox, and Chrome. The first had no frame drops using H.264, but the later had many using VP9 as verified using “Stats for Nerds” option in YouTube.

That’s the result in Edge (and the same in Firefox).

No dropped frame after 1 minutes and 30 seconds using MP4/AVC1 (H.264) video streaming. Power consumption while playing the video was 7 to 8 Watts. Compared that to Chrome results:

461 frames dropped out of 2,788 after 1 minutes and 56 seconds using WebM/VP9 video streaming, and power consumption around 11 Watts, or 3 to 4 Watts greater than with Microsoft Edge. So what’s the solution? Let’s try to disable VP9 using h264ify extension, also available as a Firefox add-on.

Magic! No frames dropped after one minute and 30 seconds (and the rest of the video), and power consumption drops to around 8 Watts.

I’ve tested this in Windows 10, but it should also work with Linux distributions on Intel hardware. ARM based mini PCs running Linux may not benefit as I’m not aware of any ARM Linux mini PC or boards that support 1080p hardware video decoding inside any web browsers.

wow, thanks! i dont have h264 hw decoding at all (old ati card) but no frame drops with sw decode anymore now!

Should be interesting to report it to Firefox team, so the can take care of this case.

Question @CNX: with WebM/VP9 still enabled, did you monitor the CPU load? If so, was the CPU (almost) fully loaded?

I have a laptop with an Intel Celeron N2840. Is the above true for that CPU?

@Sander
I did not check CPU load, but I’m sure with VP9 it was pretty high considering it consumers 4 watts more.
Your laptop should have the same problem, and it will also affect the battery life.
You just need to check whether VP9 is enabled @ youtube.com/html5 to find out.

@Harley
Actually for low power Intel processors the problem starts with the hardware, as VP9 is simply not supported by the GPU.

This also happens in Chromebooks. The issue here is that sites should be interfacing with the browser to check for what is available as hw decoding support. Since Google is pushing VP9, they don’t even seem to care at all and one has to use h264ify to fix this.

@Jean-Luc Aufranc (CNXSoft)
i also tested that in my current firefox 43.0 which also registers all the codecs on youtube’s html5 player, and i get the exact same thing 0% vpu.

hw video decoding could work in firefox on windows (check about:support “Supports Hardware H264 Decoding”) but i looks like it’s only in a DXVA context, so not available on linux.

But from what i gather html5 engines are much more WebGL (openGL ES 2) GPU acceleration oriented (3D), than hw video decoding.

@toto Firefox hides VP9 functionality where it isn’t going to be a win for the user. MSE/VP9 is enabled by default on machines that don’t have hardware decoding enabled or machines that can decode 720p VP9 at over 150 fps. Another way to put it is that MSE/VP9 isn’t enabled on slow machines unless they’re constrained to software decoding anyway.

If you are concerned about either power consumption or performance then the first thing you should so is upgrade your graphics driver. I also recommend looking at the graphics section of about:support to see if hardware H.264 decoding is available.

Google probably pays for traffic per Mb (TBC), and higher bandwidth also requires more infrastructure, so it should be less expensive for them to stream VP9 videos compared to H.264. I’m also not sure how MPEG LA licensing enters into the equation.

@Jean-Luc Aufranc (CNXSoft) i think cnxsoft : I think the reason is here: VP9: 14 Mbps H.264: 25 Mbps there’s a misunderstanding here, the bandwidth you saw in your html5 player is not the video bandwidth it’s the buffering (download) bandwidth used by the player at that time. for the video used above by cnxsoft, the video bitrates are much much lower : – VP9 video only is 50.4MB, 3.37min ~ 1.85Mbps – h264 video only is 56.2MB, 3.37min ~ 2.07Mbps You can also verify that by playing them in VLC and open the stats data which will show you… Read more »

@Sander
Firefox uses ffvp9 https://blogs.gnome.org/rbultje/2014/02/22/the-worlds-fastest-vp9-decoder-ffvp9/ which gives a 2x improvement on machines with 4 physical cores. How does Firefox compare on your machine and what GPU and CPU do you have?

Thanks for the information. I have an Intel Braswell box (Vorke V1) and noticed dropped frames under certain circumstances. I’ll try that extension.

Any workarounds for Kodi?