I’ve previously measured power consumption of Amlogic S812 and Rockchip RK3288 based TV boxes using a multimeter. This provides relatively accurate measurements, as well as neat power consumption profiles of devices, but it’s a little complex and time-consuming, so it’s not something I would do for all devices. The easiest way to measure power consumption is to use a kill-a-watt type of device, but my first one broke after only 3 months last year.  I purchased a new one recently, so I run run some power measurement tests on several devices. 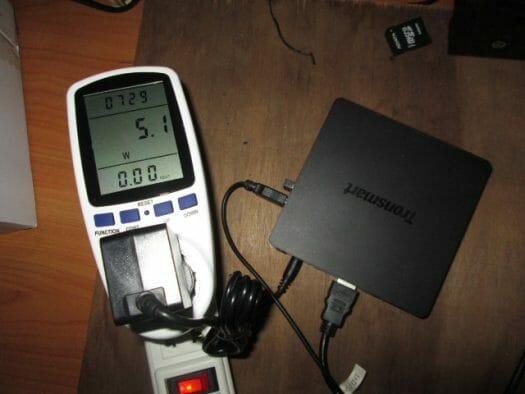 I selected five devices for this test:

The procedure used the device’s power supply, and I connected an HDMI cable, and MeLE F10 RF dongle to the device only.  The devices were connected to the network over WiFi, except for Open Hour Chameleon, where I had to use Ethernet, since the device does not include WiFi. The video output was set to 1080p60 for all devices.

The power consumption was measured for five different scenarios:

I did not change any settings in the video players before playback, and AFAIK all of them used hardware video decoding.

I’ve also drawn a chart for all five tests and devices using the average value. 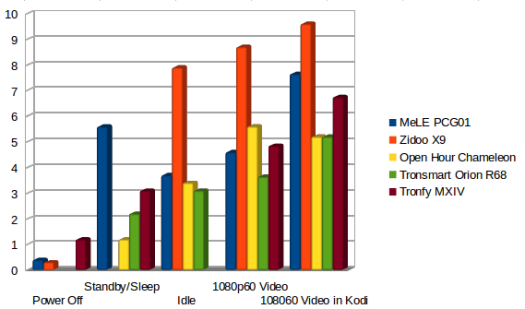 Power off, when implemented, is usually working as it should, with the devices consuming between 0 and 0.4 Watt, but for some reasons Tronfy MXIV’s power off mode power consumption is a little higher at 1.2 Watts. However, standby / sleep mode power consumption is rather on the high side, except for Open Hour Chameleon, and in the case of MeLE PCG01, you’d even waste energy by going into Sleep mode, based on the results I got. I waited a few minutes to make sure, but power consumption stayed in the 5.2 to 6.0 Watts range.

The only Intel device actually did pretty good, against its ARM based competitors, and it’s Zidoo X9 that has the worst power consumption, which may or may not due extra features like HDMI input and is not turned off when not in use, or it’s simply the overall system design is not optimized for low power consumption. The box will the lowest power consumption is Tronsmart Orion R68.

I also wanted to see if performing a given task, e.g. playing a 1080p 60 fps H.264 video, in different apps would yield different power consumption results, and in most cases Kodi consumes more power than MX Player in Android or “Movie & TV” app in Windows. The only exception being Chameleon where Kodi consumes a little less than MX Player. It’s probably not that important in TV boxes, but if you are watching videos on the go, Kodi may deplete your battery faster.

Finally, I also wanted to evaluate the cost of using the device, using the extreme case of playing Big Buck Bunny video 24 hours a day for 365 days in Kodi, and the case of playing it only 2 hours a day, with the 22 hours left in standby or power off. The costs are based on my electricity rate (4 Baht / KWh or about $0.1108 US per KWh):

From a cost perspective, there’s just over $4 difference between the best and worst device if the box plays a video continuously for a year, while if you watch videos for about 2 hours a day only, the maximum cost does not exceed $1.61 per year on Tronfy MXIV, and that’s provided you don’t disconnect the power supply after use. So it’s probably much more important to check out your TV and/or AV receiver power consumption than the one of your media player.

1. Energy is cheap as shit where you are 🙂 2. Zidoo not only has the worst hardware of the testfield it also has the highest power consumption. It still riddles me WHY Zidoo and WeTek allways pick the worst possible Chipset for their boxes. Its like: Lee (Engeneering at Zidoo):”Hey Mr. Wu (Boss of Zidoo) lets make a Android Box…Wu: “Ok, what hardware do we pick” Lee: “We could use something powerful and good to boost our image OR we could use the cheapest crappy hardware and slow EMMC that we could find”. Lee: “There is some guy from… Read more »

I don’t care about energy,
every device that has low power has effect for human eyes.
For example plama tv is better than lcd tv.
Plasma tv power consumption is between 110w-320W, but has the best refresh rate, is like old television.
So health is first.

Does the Zidoo X9 host a hdd for this test or are those numbers just for sd/emmc?

@martin
No HDD inside or connected to Zidoo X9.

I heard devices sense if they are being measured, and then change their settings to get better result out of that test. So don’t trust the tests!

@Sander
i think you are thinking about benchmark.
using a kill-a-watt its like using a multi meter there is no way for a pmic to sense they are being monitored, anymore than they are able to sense you are using a Plug Multiplier, extender, etc….
(unless they bordered to add a sensor and special data line from the adapter to the device, which is highly unlikely since they are interchangeable imo)

Sander is talking about Volkswagen and Audi 🙂 .

@milkboy
Volkswagen’s cheating at “polluting” tests is explained @ http://www.vox.com/2015/9/21/9365667/volkswagen-clean-diesel-recall-passenger-cars and some other sites…

” … and WeTek bringing the new Amlogic.

I need more info about it (thanks in advance), it sounds interesting, WETEK woke up !!!

A most welcome addition to your reviews. If unable to do for every review, at least do it for representative examples of S812, nVidia K1, & all new SoCs, eg S905, MediaTek 8173C, Cherry Trail, Skylake

Also, if you can indicate if video decoding is in hardware or software – probably quite significant when using Kodi

Sander, your joke would be funnier if there wasn’t manufacturers who actually do this kind of stuff. It seems new in the world of vehicles but it’s really old hat in the mobile SoC world.

@paul
I think it should not take much time for this test (at least for power off/standby/idle), so I’ll probably do it for all products, even though differences between products are small. Power consumption will probably mostly depend on overall board design rather than the processors themselves.

Having had the whole SoC menu, and I’m still gagging

Some people run the boxes of portable batteries, I’m curious to see the best battery pack and their true output scores.

Lol, and now Samsung might have cheated on their TV’s power consumption test too… They deny this though
http://tech.thaivisa.com/samsung-insists-tv-device-is-not-a-test-cheat/13239/

However the paper said authorities in Sweden and the UK had already expressed concerns that televisions had been installed with equipment to detect test conditions. A spokesman for the European Environmental Bureau, an internationally-funded watchdog, said there was “more than a whiff of diesel fumes coming out of this,” a reference to the Volkswagen diesel emissions scandal.