Shenzhen Shiningworth has just sent me the first Amlogic S912 Android TV box for review with their MXQ Plus M12N model. The first part of the review will focus on specifications, accessories, and hardware design, and in the second part I’ll connect and boot the device to make a thorough review of the firmware.

The specifications are pretty standard and comparable to the ones of yet to launch Amlogic S912 TV boxes:

The package is black with golden text reading “MXQ Plus” and “Bigger than Bigger”, and does not have trademarked text or logo that may cause troubles at customs. 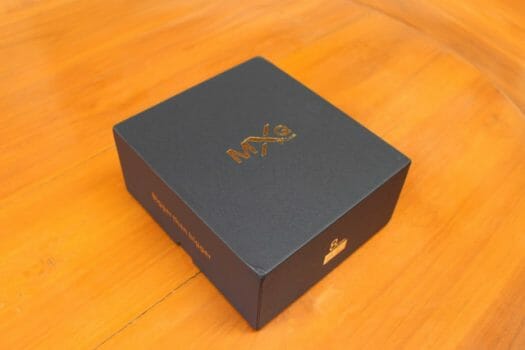 The bottom of the package lists the main specifications, and shows a C44EAC MAC address registered by Shenzhen Shiningworth,

The TV box ships with an IR remote control taking two AAA batteries, an HDMI cable, a 5V/2A power supply, and a user’s manual in English.

The front panel includes Status and Net LEDs as well as the IR receiver window, one of the side comes with two USB 2.0 ports and micro SD slot, while the rear panel features the WiFi antenna, optical S/PDIF, AV and HDMI video outputs, a Fast Ethernet port, and the DC jack.

In order to open the device, you’ll need to take out the four sticker rubber pads on the bottom, and loosen four screws. 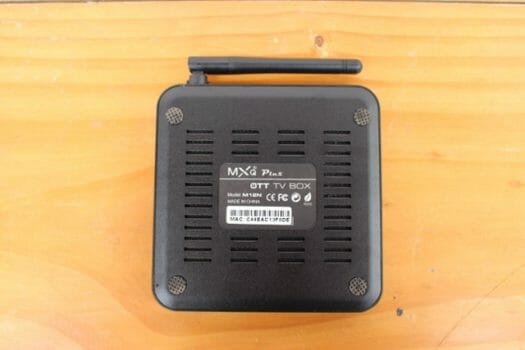 The board can easily be pulled from the case, without having to remove extra screws or plastic clip. Just be careful due to the WiFi antenna.

Thermal design is interesting as it does not include an heatsink at all, but instead two thick thermal pads are sticked to the top of the metal case, and cover Amlogic S912 when the box is closed. I’m not quite sure how well this is supposed to work.

Beside Amlogic S912 SoC right in the middle, we’ll find two more NANYA RAM chip to bring the total to 2GB, as well as a 16GB Samsung KLMAG2GEND-B031 “high performance” eMMC 5.0 flash capable of achieving 250MB/s read speed and 50 MB/s write speed in theory, as well as 6000 random R/W IOPS. I’m a bit surprised by that, as Shenzhen Shingingworth customer often use slower storage, but the flash chip used here looks pretty good. Network connectivity is achieved using PPT 1608 PM44-11BP transformer for 10/100M Ethernet, and Ampak AP6255 module for WiFi 802.11 b/g/n/ac and Bluetooth 4.0 LE connectivity. DIO1233 audio driver can also be found close to the AV port, which also servers as the “hole” for the recovery button. The serial console (UART) is located between the micro SD card and one of the USB ports and is clearly marked with Tx, Rx, 3.3V and GND. The board’s part number for my sample is M12N_55_V0.95.

I’d like to thank Shenzhen Shiningworth for providing a review sample, and resellers and distributors interested in purchasing in quantities can contact the company via their website, or Alibaba where the device is listed for $52 for samples, and $47 per unit for orders over 1,000 pieces (FOB prices). I’ve not been able to find the box on retail websites yet, and it will probably be found under various names such as M12N, MXQ Plus S912, or ENYBOX X2. [Update: The device is sold as Acemax M12N for $69.99 on GearBest, and $82.99 on Aliexpress]

[Update: The second part of M12N TV box review is now up with tests for Kodi, Android, benchmarks, and more]

Thermal pads in most consumer products are terrible. They’re generally silicon rubber and the best products on the market have a thermal conductivity of 10-12 W/m-K. For comparison pure Copper is 385 W/m-K and Aluminum is 205 W/m-K. Panasonic does sell graphite based thermal pads that are 1950 W/m-K (!) but these are sold in thicknesses of 0.01mm. (***) All materials have some amount of thermal resistance too so the the longer the distance between the heat source and the radiating surface, the worse it will performance. With all that said, it looks like the case is not designed for… Read more »

I hope there will come some TV-Boxes with the S905d, this chip has DVB-tuner hardware support.
Waiting for Sat-TV over Android-TV-OS with with real HD-audio-passthrough…

WeTek Play 2 is comming with 905H according their forum next week, and it support HD audio passthrough….

Sweet!
Looking forward to seeing it in action in Part II…

@thesandbender
Your footnote reminded me of why graphite bombs are so efficient ; )

Thank you very much for the article

Any plan for booting ubuntu on this device?
And article about that:)

@m][sko
I’ll be quite busy with reviews in the next few weeks. But maybe later 🙂