Theater in a Box sent me not one – as expected – but two of their latest “Pure Linux” Kodi media player: ARNU Box Mach 10 powered by Amlogic S812 SoC, and ARNU Box Q based on Amlogic S805 processor. The former has a faster processor, and supports 4K, while the later is cheaper but is limited to 1080p. Today, I’ll have a look at the hardware of both devices, starting with ARNU Box Mach 10, before completing the S812 Linux box review in a few days.

The hardware specifications are pretty similar to what the rest of the market is offering:

The main difference is with the software, as the box does not run Android, but only Linux and Kodi 15 with Cloudword installer that configures and customizes your box with add-ons curated for your country.

That’s the package for the Mach 10 box. 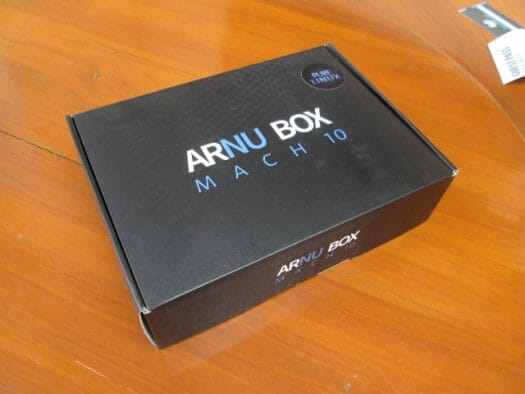 The box comes with an HDMI cable, an IR remote control that requires two AAA batteries, a 5V/2A power supply, and user’s guide in English that refers to both “Pure Linux” and Android versions of the box.

A closer look at the box reveals the front panel LCD display and IR receiver, and the SD card slot on the side of the device, with most ports found on the rear panel: two USB 2.0 host ports, HDMI output, Ethernet, AV port, optical S/PDIF, the 5V power jack, and external WiFi antenna.

The casing feel a bit sturdier and of higher quality than most of the TV boxes I’ve tested so far.

To open the box, the procedure seems quite standard, there are four sticky rubber pads on the bottom that needs to be removed, and four screws to be loosened. 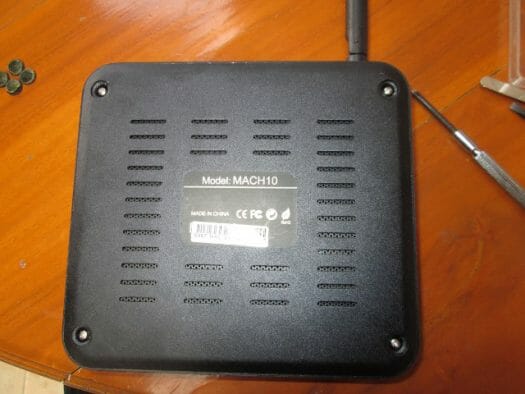 The screws were easy to take off, but I failed to find an opening on the side between the two part of the casing, and after several attempts I simply gave up. That is until I found the technique with Mach Q box, and went back using another tool from my diassembly toolkit.  The trick was to insert the tool on the left in the picture below in one of the many ventilation openings, and pull firmly.

There’s some sort of black net glued to the bottom of the case. I’m not sure why it has been placed here. Dust protection? Cooling?

I removed four more screws to completely take out the board from its case. The WiFi and Bluetooth module is the popular AP6330, and the MAC address starts with C4:4E:AC meaning that it’s one of these boxes manufactured by Shenzhen Shiningworth Technology. I’ve also taken out the heatsink to have a clear look at the top of the board.

RAM and internal storage memory chips are however different from Eny M8S. The box features four 4Gb SKhynix H5TQ4G63AFR DDR3 chips (2GB RAM in total), and a 16GB Toshiba THGBMBG7D2KBAIL eMMC flash, so at least storage will perform better than on M8S.

ARNU Box Mach 10 Pure Linux can be purchased for $149.99 on Theater In a Box. So far, I could not find this exact model in other stores, but of course, there are similar Amlogic S812 based models running Android such as M8S. For reference, ARNU Mac Boxes were previously called Armada Mach Boxes.

i think wetek core is less expensive and more support

Armada boxes are expensive like hell and same story continues with ARNU, they come preloaded with customised Kodi full of trash add-ons for piracy.

davor.rosicki :
Armada boxes are expensive like hell and same story continues with ARNU, they come preloaded with customised Kodi full of trash add-ons for piracy.

Agree as I understand that the Cloudword installer that comes with box installs illegal piracy addons.

@massimo, @davor.rosicki
I own both the armada mach 8 and a wetek play. No support in wetek. Just beta firmware. There openelec is miles behind the 8 ball. I doubt their wetek core will do much better.
At least these guys are producing quality firmware with decent support. I haven’t seen one bad review from an owner of an armada box. And now that my armada mach 8 box is running Kodi 15, it kicks the rest of my hardware collection’s (raspberry pi, cubox-i4, wetek play, mygica, matricom…) ass!

Bobber :
@massimo, @davor.rosicki
I own both the armada mach 8 and a wetek play. No support in wetek. Just beta firmware. There openelec is miles behind the 8 ball. I doubt their wetek core will do much better.
At least these guys are producing quality firmware with decent support. I haven’t seen one bad review from an owner of an armada box. And now that my armada mach 8 box is running Kodi 15, it kicks the rest of my hardware collection’s (raspberry pi, cubox-i4, wetek play, mygica, matricom…) ass!

Pretty sure that Bobber must work for ARNU or one of its resellers.

ARNU is Awesome!! i love the cloudword Feature
if anything goes wrong, they have great support. with one cloudword it helps set my box up in minutes. i got a few different streaming boxes, arnu was the best with customer support.

lollll so…. one person gives a good review about a product so they have to be in cahoots with the company? Seems like you guys are just wanting to give them a bad name. Who do you guys work for? lol. Have you guys even tried any of their units? I bought a mach 8 pure linux from them, and I’m still happy with it. The s**t isn’t even preloaded with anything, you guys gotta get your stuff together. Kind of fishy tho don’t you think? As soon as a unboxing / review comes out, the three people who I’d… Read more »

ARNU rocks! Cloudword is a game changer. Like a wizard for the masses. Makes life so much easier for the newbies. Croniccorey and Josh.5 have poured their heart and soul into Ember if you guys only knew how many hours of coding is involved. I’ve used Corey’s firmware on every device I’ve ever had. The difference in performance over android on the box is blatantly obvious. Personally I have no issue paying a small premium for firmware that works like advertised. Any issue I have ever had was dealt with in a timely manner or answered in a forum. My… Read more »

Can it run openelec?

Awesome company awesome product awesome custom care..Arnu Box pure Linux 64bit is fast as hell..maybe a little on the dear side but it’s worth it and don’t take my word for it.cloudword is still a game changer.when you turn on the box first time it has no addons.but with cloudword you box is setup within 2 minutes.