MINIX may have officially announced MINIX NEO Z83-4 Cherry trail mini PC at IFA 2016, but they also showcased NEO U9-H Android TV box based on an “Octa-core cortex A53 processor with ARM Mali-820MP3 GPU”, which the company confirmed to be Amlogic S912-H processor with Dolby and DTS licenses. 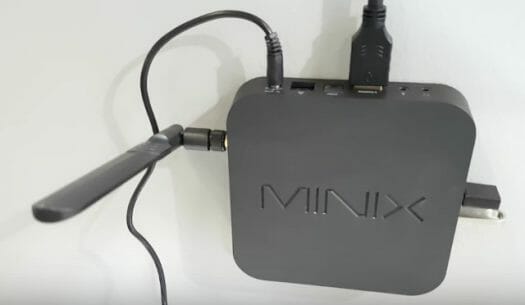 I also asked the company whether they had specs sheet for the new model, but the replied they did not have finalized specifications to share, nor exact pricing and release date. But we can still derive info from a video on HDBlog.it showcasing an early development model at IFA 2016.

The TV box will run Android 6.0.1. We can see the unit in action below (in Italian).

One interesting point is that Widewine Level 1 DRM is supported, so some premium video streaming app will support HD and maybe 4K UHD, . HDR videos were also showcased in the video.

HDBlog also mentioned the box should be ready mid October, and expects the price to be around 150 Euros, likely including an air mouse, and VAT.

HBO Go is not going to benefit from Google Widevine L1 DRM. HBO Go relies on Playready DRM. I was quite surprised to find HBO Go working (no audio) on Mini M8S II that doesn’t even have HDCP. To my knowledge, Netflix is the only U.S. streaming service provider that requires L1 DRM.

I see Minix is listed at microsoft playready licensee list so we can expect playready?

@wesk05
Thanks for the info. I could see HBO Go in the video, so I thought L1 DRM might be useful for for it. DRM info app, again in the video, reports no PlayReady DRM. That’s an early sample, so maybe they’ll add that later.

Dear CNX, I hope you can give me a hand (and sorry about the off topic), my question to you is very simple: I need a Windows Box just for regular office work. I like Voyo (I’ve read your review) however I feel that maybe there are another better options?? More cheaper but keeping reliability?. In my office we only use MS Office (Excel, Word) and “soft” web navigation (well, maybe some windows are often open at the same time and that’s it). I’d really appreciate your help mate, thank you!

All those models should be decent, but if you need something cheaper and 2GB RAM is OK then maybe check out MeLE PCG03 (Bay Trail only): http://www.cnx-software.com/2015/01/29/mele-pcg03-mini-pc-review-and-benchmarks-with-windows-8-1-with-bing/

How come yet another company releases an Android TV box with USB 2?

Given it’s running Android 6.0+ using a USB 3.0+ harddisk to expand internal memory is(for me) the only logical way to go. Using only usb 2 means much lower performance on disk-access. This being a device for media consumption and games, with a bottleneck like usb 2 is only pushing me towards nvidia and it’s Shield TV instead of other solutions

It’s HDR is nothing more than marketing fluff.

If your in any way targeting the western market I don’t get why these guys just don’t do a legit AndroidTV box instead of shoehorning phone Android into these set top boxes. That way you get all the legit media services & proper usage of features like HDR (by the HDR10 is actually quite complex with a lot of parts that easily go wrong).

Their HDR fluff appeals only to grey market and asia which I guess is who they really target.

@Rodrigo
Not sure whether it is something that Minix got recently. I don’t think I have seen Playready DRM on X8-H/Plus/U1.

@Jean-Luc Aufranc (CNXSoft)
Dear CNX THANK YOU so much mate, I am very impressed about the Vorke! you are right it’s the best option for me, the ability to attach a SSD and update the RAM is impressive for the price. I hope its W10 be 100% legal, cause you know, even the Voyo (they say) is bootleged :/

I’ll try one unit and then I’ll go for more, thank you again CNX, you are the man 🙂

@DaylightDies
Based on http://www.cnx-software.com/2016/09/02/hardware-requirements-for-discounted-windows-10-licenses-for-entry-level-mini-pcs-tv-sticks-tablets-notebooks-and-aio/, it might not have a 100% legal license since it comes with 64GB storage.

@Rodrigo
The price is just speculation by HDBlog, so we’ll have to see how much it really is once the product launches.
If entry level S912 boxes are sold for $50, it will be hard to sell it for 150 Euros even if 20+% VAT and air mouse are included in the price.

@Jean-Luc Aufranc (CNXSoft)
Yeah you are right CNX, I think the same. I hope the solution be so simple like entering a new valid key… BTW Dou you have the link for drivers?

@DaylightDies
Going even further off-topic but do you have a problem with it not being 100% legal? iirc the key is only meant for upto 32GB storage, that has 64GB, but it’ll still work and there’s almost no chance of legal issues.

Otherwise I guess you could resize the main partition down to 32GB if you had to have a legal key, then it would fit the req. for the provided licence.

Netflix has seen that post, they don’t like it, and I’ve been asked to remove the post…
I plan to keep it for now. That’s the third American company trying to mess with my content, after Microsoft and Intel.
The funny thing is that they never contact me directly, but complain through their customers or partners.

Wonder if this unit will be rooted?

@meagain I hope my Vorke don’t ask for a valid key for activation after a few months, but if so, I will follow your advice, thank you so much!

@Jean-Luc Aufranc (CNXSoft)
Netflix behaves like a BULLY and it’s not the first time they do this. I hope NETFLIX DO SOMETHING in order TO GIVE ME HD, BECAUSE I AM A CUSTOMER and I pay for HD, and I have MINIX… what else do I need??

HEY NETFLIX, I dónt like your attitude, could you erase that? It’s so hard for you do something for your costumers??? at least with brands that try to do it well?……. meh