WeTek has been working not on one, but four new devices recently. I’ve already covered WeTek Play 2S (previously known as WeTek Play+) based on Amlogic S905 Rev. C , running Android 5.1 or OpenELEC, and featuring digital TV tuners (ATSC, DVB-S2, DVB-T2/C), which should become available in Q2 2016. The company has unveiled another model called WeTek Hub with features closer to the ones found in other Amlogic S905 TV boxes I’ve reviewed so far, except it is based on Amlogic S905-H revision C,  comes with Widewine and Microsoft PlayReady DRM, and supports both Android 5.1.1 and OpenELEC. 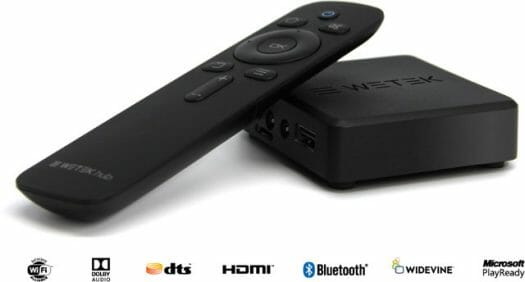 The device is said to dual boot Android 5.1.1 and OpenELEC, with Ubuntu Linux likely supported by the community. Amlogic S905-H has the advantage of having DTS and Dolby licenses so audio should work in all apps, and revision C of the silicon fixes freezes and artifacts with some 4K 10-bit H.265 video streams (e.g. DVB-S2). The DRM will allow for full HD video streaming in apps like Netflix. The device is also really small, for example I know have MXQ-4K on my desk, another TV box based on Amlogic S905 processor that measures 117 x 117 x 27 mm, and does not really feel big either. 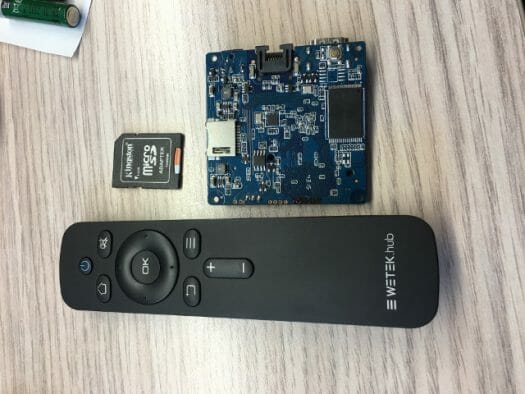 WeTek Hub will ship with a power adapter, an HDMI cable, a remote control, an IR extension cable, a plastic bit for firmware update, and a warranty card. The IR extension cable will allow you to place the box behind the TV (mounting bracket are also provided or available), or hidden in your cabinet. Price is rumored to be between $70 and $90, and the device will start selling at the end of April.

Thanks for these links theeuwke.

And it seems weird that they would launch 4 new devices. Maybe these are just prototypes, and only one of them would become commercial?

@Jean-Luc Aufranc (CNXSoft): here is a useful informative comparison table of all these new models. you should publish it here.
http://imagizer.imageshack.us/v2/xq90/923/79VGOy.jpg

The Play2s is the flagship model, and it has tuner. it has 2GB ram, 16GB rom (+mSata) and a qwerty remote/air mouse.
it seems that it doesn’t have AV output. pity…

@Ron
I saw another very blurry picture of that table this morning, but this one is much better.
I’ve already reported about WeTel Play 2S (Play+), and we already knew the full specs.

@Ron
I think S905X is for Q3 2016, and then they’d have to spent some extra time for testing, which would mean maybe a product release in Q4 2016. At some point you need to make money… But maybe 2017 will bring a WeTek media player with Android TV operating system and VP9 (just speculating, no inside info).

It’s quite ironic that since the first time we heard that Wetek is going to use S905-H in its future device – something that haven’t happened yet – Xiaomi had already started and finished using the same SoC on its Mi Box 3, and had already replaced it with another SoC (by Mediatek) on an updated Mi Box 3 Enhanced… A whole life-cycle of a media box using the same SoC, during the long preparations of Wetek for utilising it in its upcoming device! Does this imply something about Wetek and Xiaomi and the differences between them? Can we conclude… Read more »

@Ron
Xiaomi got a reserved batch with S905-H processor, that’s why they could come to market earlier.
WeTek purposely delayed the product launch after they found the codec bug in Amlogic S905 processor, and waited for Revision C (with the bug fix) to become available.

Both new Play versions show Ubuntu Linux in the Software box, along with the Core and Hub. Yet they tell you in the forums it is a community assumed and driven support. That is 100% false advertising. Upsetting to see false claims like that. I could get Ubuntu Linux support on my Nexus Player using that logic, but only if the community gets involved. You could say that for practically any device. That’s false advertising no matter how you look at it. Very upsetting

Hello everyone, I have a Tmall magic-box M13 with S905-B processor(I don’t know what revision it is, I teardown the box and comfirm the processor name end with B). I use buildroot from amlogic http://openlinux.amlogic.com:8000/download/ARM/filesystem/arm-buildroot-2015-12-25-05d8ead338.tar.gz to build the kernel, and use dtb file extracted from stock firmware to boot, but it end with kernel panic and hang. I think the kernel source is not compatible with the processor S905-B, or some special configs I ignore. Can you help me to build a kernel that can run on S905-B?

WeTek Hub and other new WeTek device will support icflix, the Netflix equivalent for Middle East and Africa, with one year free, and then $7.99 a month -> http://wetek.com/blog/view/58/partnership-between-wetek-and-icflix

Hello, I look now no longer the
the SoC 905 vs SoC 905x, it is not with the Armlogic 905 possible sound packages unchanged to send to the av-receiver via HDMI cable and let there be decoded? And the av-recheiver dec Dts-HD or Dolby digital. I need now for a S905x?
Thank you very much

cnxsoft : @Leslie Meyer Beide Amlogic S905 und S905X können Audio – HD – Pass-Through unterstützen. Thanks for the answer, if the Amlogic S905 / S905x DTS-HD / DD-HD sound can forward via HDMI pass, then accordingly falls for Amlogic at any licenses? The Amlogic S905x therefore only has a better sound through the analog output due to the DAC? Can it be that the Rockchip RK3288 is a better choice than the Amlogic S905, because he can play more formats? I am surprised very because it is more favorable, and even less support gets at least some adjustments was… Read more »

@Leslie Meyer My experience is that you don’t need licenses for pass-through, or at least if any if needed they have included in all versions. Now if you don’t use an A/V receiver, Kodi will handle Dolby or DTS downsampling to PCM, but most other apps won’t because of licenses missing on S905 and S905X, which are present on S905-H and S905X-H, so you are fully covered. Rockchip processors don’t quite have the same video capability as Amlogic processor, and videos are often not quite as smooth, HD audio support may or may not be supported, etc… However for other… Read more »

I have the Nvidia Shield TV and Beelink MX Mini III in the latter I have no HD audio via HDMI pass. hinbekommen in the shield portable TV already. The advantage of “DTS and Dolby licenses” So is that the S905-H, “unzip” the DTS and Dolby packets themselves can, and sends via PCM on the TV or digital (optical connected speakers? ` Thanks for the clear up to the RK3288 chip, I had wondered that the $ 20 device play at Youtube as many … 10bit / VP9 …. I think in addition to the shield portable TV is himedia… Read more »

WeTek Hub is up for pre-order for 89.90 Euros @ https://wetek.com/shop/wetek-hub
Shipping is scheduled for July 16th. My review will probably be posted on July 18th.

I’m considering giving up on WeTek Hub review. It’s hanging 5 to 10 times a day, and at times it’s really slow, probably because it overheats. So either it can’t handle slightly high ambient temperature, or my sample has issues.

Huh, that’s not good. That sounds like something might be defective with that unit itself. It’s certainly not bugless at this point, but hanging that often and being generally slow could be a heat issue, which isn’t typical from the other people who’ve been testing the Hub. If someone else from WeTek hasn’t reached out to you yet, feel free to poke me at ned at wetek dot com.

When we to expect test of the wetek hub?Did they send you new sample?

This Post needs updating that soc only does 1.5 GHz..

WeTek Play 2 with DVB-S2 option has missed now.
Only DVB-C/T2 and ATSC can be selecting.

Did we wait some new amlogic cpus?
I see the alwiner now it have 6k support..

I understand about 6k..
I just asked if there is something like an answer.. a new cpu from amlogic.
You think we have a lot of time for new generation cpus from amlogic?