MeLE PCG03 is an Intel Atom Z3735F mini PC with 2GB RAM, and 32GB eMMC. I’ve already posted some pictures of the device and board, and since Windows 8.1 with Bing NTE (with proper license) is installed, I’ll first test the device with Microsoft OS as a reference, before trying Ubuntu or/and Android.

The computer comes only with a power adapter, so you’ll need to find an HDMI or/and VGA cable for your display(s), and a USB keyboard and mouse to get started. Optionally, you’ll also want an Ethernet cable, and since storage is limited an extra storage device be it a USB hard drive, flash drive, or SD card.

Once all is connected you can press the power button on the left side to boot the device. The boot normally takes about 20 seconds, but the first time, you’ll go through the usual Windows 8.1 setup (I assume), including country, time zone and language selection: 中文简体, 中文繁體, English, Français, Deutsch, Italiano, Nederlands, Espanol, Português (Brazil or Portugal), русский, Čeština, slovenščina, ,فارسی Polski, українська, العربية  or .עברית If your local language is not listed then you are out of luck.

You’ll also have to create a local account, or sign-in with an MSN account, and you should be done. So the process is pretty much straightforward.

The screenshot above is after cleaning up the junk a bit, and adding my own app. The box is connected to my 4K TV, but the maximum resolution supported by the device is 1920×1080, and the lowest 1024×768. You may also connect an extra monitor via the VGA port for a dual display setup. I’ll demo this below in this post.

Let’s get some more details about the system. 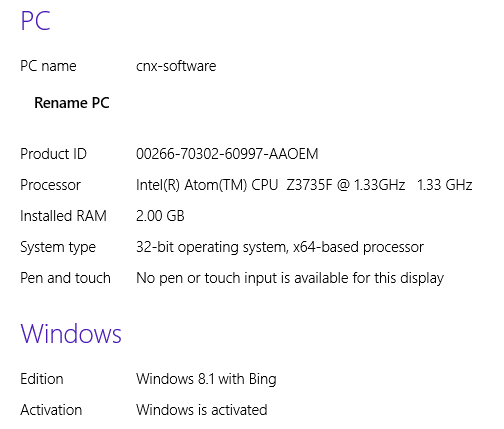 As advertised the system comes with a Z3735F processor, 2GB RAM, and the 32-bit version of Windows 8.1 with Bing activated. I also received a Windows Update while testing. The company also told me it would be possible to recover the firmware, but did not provide a link. They’ve just provided their FAQ explaining how to upgrade the firmware, and configure other things like audio and video output.

There’s a 28.7GB partition out of the 32GB eMMC, and about 16 GB free space. The screenshot above is after installing Firefox and Crystal Disk Benchmark.

The Device Manager shows the list of devices, but we already knew about the hardware with tear-down. Realtek RTL8723 (BS) is also used in Meegopad T01 and Pipo X7, which should be good news for Android and Linux support. 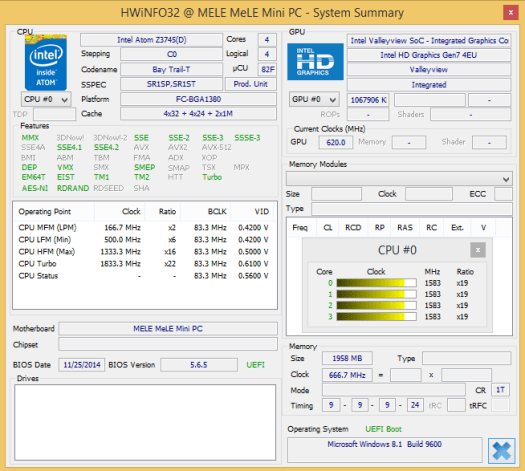 I ran also HWiNFO32 to get more details about the CPU, which is incorrectly detected as Z3735D, but the other information should be correct, as both processor are very similar.

In case you wonder about the BIOS, it’s basically the same AMI Bios as other Intel Atom Z3735F devices.

You can watch that video to see all options. This is for MeegoPad T01, but the BIOS is bascially the same, except the one in PCG03 has been built one month earlier.

PCMARK 8 is a standard benchmark for Windows, and covers lots of area include office use, video conferencing, gaming, web browsing and so on. I downloaded the basic version, and ran the baseline test.

MeLE PCG03 gots 1,105 points in PCMARK 8 HOME CONVENTIONAL 3.0 test. The software somehow detected an Intel Core i7-5960X…
It’s the first time I’ve run this benchmark so looked for some comparison online. For example, an Intel Core i7-920 processor with Nvidia GeForce GTX770 gets 2,610 points. I was expecting a larger gap, but if you look into the details, you’ll find that Casual gaming is 10 times faster on the more powerful computer.

I measured the temperature on top and bottom of the enclosure right about the benchmark at respectively 39 °C and 46 °C, so that part is under control.

The internal storage is a Samsung eMMC 5.0 flash, and performance does show. 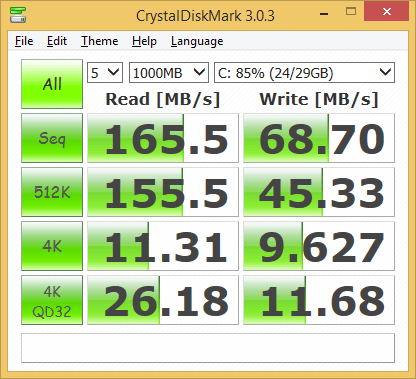 Benchmarks are nice, but nothing it worth and hands-on experience, so I’ve shot a video showing the device, some settings including storage and display,  and tasks that may be challenging in competing ARM Linux hardware platforms:

The refresh rate of my camera and the 4K TV does not match, so at times (desktop and web browsing), the video is a pain to watch but hopefully, it will give an idea of the performance and capabilities of this mini PC.

So overall the device is quite usable, but I experienced obvious stuttering while playing 1080p YouTube videos (Embedded or Full Screen), and animation in Candy Crush Saga were pretty slow. The good news was I could play some 4K videos in Kodi (albeit outputted to 1080p), and Asphalt 8 is running reasonably well, although a higher frame rate would be nice. With the wave of Intel Bay Trail mini PC, the VGA port is clearly a strong point of this box, especially dual display is working as it should. If you really intend to use this device as a PC for web browsing, emails (Outlook. Thunderbird),  and an office suite, you’ll likely run out of space pretty quickly, so an external storage device is a must. 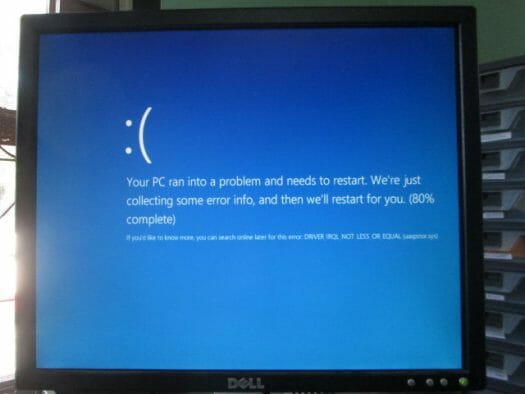 If you miss Microsft BSOD, don’t worry it’s alive and well! 🙂 This happened when I connected the hard drive via a USB hub, instead of directly to a USB port on the device. Maybe a power issue?

That’s all for today. I’ll write a separate post to thoroughly test video playback in Kodi Windows, and then try alternative operating systems such as Ubuntu and Android, and compare how they perform versus Windows 8.1.

Did you try it with your MeLe air mouse remote thingie? I’m curious how it works with MeLe hardware, especially in Windows.

Could you test if the UEFI bug with keyboard is still there? it’s simple to test: Go to the UEFI menu, and in the “Exit” menu there is an option to go into EFI shell. Go in, type any command and press Enter (it doesn’t need to be a command, just type anything and press enter). Now, if the bug is there, you’ll see what you typed in the next line and whatever you press, the shell will delete it. Another bug, put a MicroSD (or SD Card with USB or Disk on key) and try to boot from it… Read more »

@Hetz
1. No such problem with UEFI shell
2. The SD card won’t show as a boot option. If I select a USB flash drive with data (non-bootable) in the menu (UEFI: Trancend….), it will just fallback to boot Windows.

@Tired_
Yes, MeLE F10 Deluxe works fine in Windows, I used it my video to control Kodi.
I’ve read some complaints from people who said it can’t be used to power on the device, and that’s true (and expected). Standby on/off does work however, just make sure the air mouse is in remote mode when you press the power key to enter standby mode, or the mouse pointer movement will immediately get the system out of standby.

Hanging on your every word for Kodi performance review on this device. Would also be interested to know if the machine can be powered up remotely, ideally by I/R Harmony remote.

I have not found a way to power it up remotely. You’d probably need to get up, and press the power button.

@bruce
* Minecraft ask to register an account for a demo? This has been tested on a similar platform: https://www.youtube.com/watch?v=Ms9v3ntx2QA
* Primoroseeditor works OK, not exceptionally smooth though, but not that more sluggish than on my PC.
* Arcade SF2 shows me the “Fetching BIOS and Game” animation forever..

Not directly related. But here’s a tool to backup your Windows 8.1 license key -> https://www.technibble.com/recover-windows-8-key/

Something you’d probably want to do before updating your BIOS.

@Jean-Luc Aufranc (CNXSoft)
Also on mega: https://mega.co.nz/#!M08QhJ5C!u3lJzZ9yp1pmQY82hzAtEn9Xfb_v_LmTzxKpWKWqI-c
I’ve done it as I needed to wipe out Linux, and re-install Windows 8.1, and it works fine. You also need to click reboot when the popup windows appears to complete setup and activate Windows.

After setup is complete, they ask you whether you want to update to Windows 10. That’s what I’m doing now. 2GB download, so it may take a while.

I changed the PCG03 Plus advanced BIOS setting:”auto detect lpddr3 rom” from enable to disable. and “lpddr3 chip select” from 1rank to 2 rank. After that the the PCG03 Plus can‘t work!!!the indicator lamp was blue ,but no vga sign,no boot logo~usb keyboard only power lamp on， no reaction to click the Caps Lock or NumLock button.
I try to remove the BIOS battery to resset the BIOS,but there is uselesss!
I can’t find any help on the officer website！！Please tell me how to do (T_T)