A couple of weeks ago, I reviewed ReSpeaker board combining MediaTek MT7688 WiFi SoC with WM8960 audio DAC, running OpenWrt, and allowing you to perform tasks using text-to-speech and speech-to-text thanks to the built-in microphone (or optional microphone array), and a 3.5mm audio jack to connect speakers, as well as several I/O pins. It turns out there’s been board with similar features, minus the built-in microphone, available in China for a while. Meet Widora-NEO. 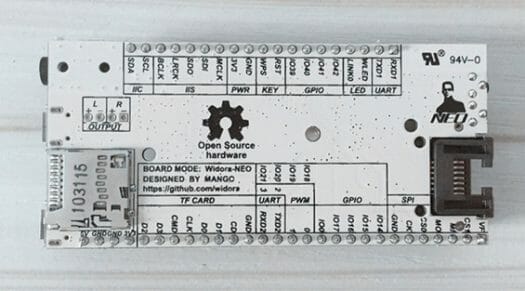 The board is running OpenWrt Chaos Calmer R4937 with Mediatek official closed-source drivers, support for AP and STA (APCLI0) modes.  I could also find some references to Node.JS in the pictures, and spotted some commits credited to bug fixes made on ReSpeaker OpenWrt. The back of the board features an “Open Source hardware” logo,  and while I could find OpenWrt and U-boot on their Github account, I was unable to find any hardware files. They also have a dedicated website with forums, but all information is only in Chinese at the time.

The board will be much harder to play with compared to ReSpeaker for people who can’t read Chinese, but at the same time, it’s quite cheaper, as it sells for 99.00 RMB ($14.86), 106 RMB ($15.91) with OTG (cable?), or 140 RMB ($21) with a camera on Taobao. Widora-NEO is also listed on Aliexpress, but for $200 they probably don’t plan to sell it, still you will some more Google translated details on that page. The main developer also has a Twitter account, where he mentions an upcoming Widora-AIR based on Espressif ESP32.

I was just searching for a board like this. Does somebody know if there are usb expansion headers.

@Roel
There aren’t any USB signals on the headers AFAICS.

Can you shop on Taobao from outside China? If so, are there any English guides with screenshots describing the process?

@noone
Some sites also a forwarding service. They buy for you on Taobao, take a commission, and forward it to your address.
See http://taobaofocus.com/, https://www.taobaoring.com/…

btw, there’s a holiday in China right, so nothing will happen until Monday.

Well you have onion2 with the same chip And only the uSD connector on the board, other pins are on the pin headers. This should work for you.

i used http://dangerousprototypes.com/store/china_forwarding a few times. But you have to manage more then normale but really cheap.

@Jean-Luc Aufranc (CNXSoft)
Hello! Thanks for mentioning us.We can help you with ordering on Taobao and shipping abroad China. Please contact us if you will have questions about our service. By the way, we are working during the Festival, so you can contact us any time

It seems that they have something more interesting Widora-BIT. Would really like to get my hands on this.
What I’m most interested in ATM is the power consumption without the WiFi on and with the wifi on. And the status/stability of open-wrt.

It has one microusb connector for Host,another one for ttl serial debug(cp2104 onboard) 🙂 @Roel

widora has open source openwrt in github.com/widora/openwrt_widora(but the Mediatek closed wifi driver,like onion2,linkit,they also use this driver,I now rebuild a strong and new .ko driver for widora,support AP,APCLI,Elian,Airkiss).open sch in pdf. if you want the open source wifi driver for MT7688,see github.com/openwrt/mt76 for some help 🙂@Nobody of Import

@noone
I ever used Superbuy to buy electronic components from Taobao. This Taobao buying agent company offered reliable service and charged 0 service fee, the shipping rate, however, was a little expensive. You can visit its official site, https://www.superbuy.com, to learn more.