Amlogic S905X was supposed to allow for cheaper TV boxes compared to Amlogic S905 ones thanks to more integration with built-in Ethernet and audio DAC, as well as support for 2-layer PCB. It also adds 4K VP9 support, but it’s mostly useful for YouTube 4K, a feature only available in devices running Android TV operating system, with Xiaomi Mi Box the only option that I’m aware of based on S905X. Amlogic S905X has also been found to be slower than Amlogic S905 processor, so unless you absolutely need Android 6.0 or/and VP9 support, there’s very little reason to buy an Amlogic S905X box if it’s more expensive, which was the case for most devices so far. SCISHION V88 PRO TV box changes that somewhat as the Amlogic S905X TV box is sold for just $21.99 on GearBest. 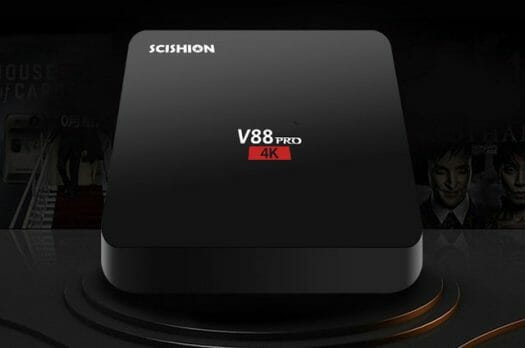 The device runs Android 6.0, and ships with an IR remote control, an HDMI cable, a power adapter, and a user’s manual in English. 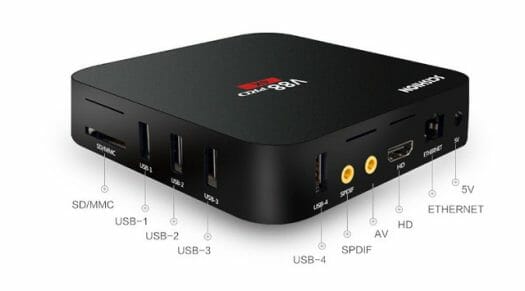 If the device feels familiar, it’s because the company previous model was the $20 SCISHION V88 RK3229 TV box.  The Amlogic S905X model is also sold on Chinavasion for $23.77, as well as eBay and Aliexpress, but the prices in the last two shops are currently not very attractive ($30+).

Any chance of having GNU/Linux running on this?
Thanks!

I’m just curious why these sort of boxes tend to get so much coverage here (articles and advertisements). What are folks doing with them? I’ve only really seen Armbian, but what are folks running on them? Linux, Android, Kodi, ???

How is the performance compared to the non pro version? The former version is very slow regarding to io performance. Even I have serious doubts if the 1gb of ram is real and it doesn’t come with a zram arrangement.

I’ve been wondering the same thing myself. I’d much rather be running a vanilla-ish mainline android or linux than the garbage I’ve seen pre-installed on these sorts of boxes.

@Jean-Luc Aufranc (CNXSoft) can you recommend one of those devices with android source code available?

@PoV @Ace I think most people are just using them with Android to watch movie, and online videos with Kodi and other apps. Some people will run Linux, mostly headless (TBC), others use those boxes to make their own product, for example digital signage. The whole story about Android TV boxes here is because I used to work on Linux IPTV boxes and digital signage, and also when Raspberry Pi was launched in 2012, it was hard to purchase, and I found arm-netbook community doing some work on Allwinner A10, so I purchase Mele A1000 Android TV box, and did… Read more »

@Sergio
There have been source code release in the past for TV box, but it was often outdated (two months delay from stock firmware). If the latest Android version is important to you, I’d recommend going with 96Boards Hikey development board, it’s officially supported by AOSP -> http://www.cnx-software.com/2016/03/11/96boards-hikey-development-board-is-now-officially-supported-in-aosp/

@Jean-Luc Aufranc (CNXSoft) Have you seen any product yet that exploits the S905X “support for 2-layer PCB”?

@Curmudgeon
Not yet, and I may not see any anytime soon, since I’ve stopped accepting Amlogic S905X TV boxes for reviews, except Xiaomi Mi Box, which supports Android TV OS and YouTube 4K, and should be reviewed by Karl, once he gets the box, and has time to look into it. The Mi Box is unlikely to be a 2-layer design though.

Does anyone know how to boot one of these from USB/SD? There is no reset button or hole to put a toothpick in.

@Narakorn Songkittirote
Did you get an answer? I am also looking for it but still haven’t found it: http://imgur.com/a/dD6y6

@W
There is no such button in Pro. To get to recovery, use an SD card, put ANY zip file on it (needs a dummy one), use the UPDATE&BACKUP software according to this tutorial: http://www.cnx-software.com/2015/11/24/how-to-upgrade-firmware-on-amlogic-s905-tv-boxes/. All works, just tested that on my box

how to get to the Root on SCISHION V88 PRO?

Actually I have one of this. Cons: – The stock android is slooow and buggy. IT always replaces store to -xdpi one and wont work any more. – The AV jack’s ground an left channel is shorted. So you don’t get sound for left. It is probably not the jack’s fault, other users confirmed to have this problem. Maybe some component is in wrong place on the board. – It can’t be turn on with remote if you turned it off (not just sleep). Maybe bootloader is not created for this actual remote. Is there any s905x boxes with the… Read more »

Hello
Can anybody write what AV cable is proper for this box?
There are different kind of cables: long (17mm) and short (14mm) jack, 3 or 4 point cables.

@kold
Usually you need a 3.5mm jack to 1x RCA for composite, 2x RCA for stereo audio. I’m not 100% sure about the required connector length for this model, but usually other models use the 16-17mm type.

How can we ” replace the /etc/remote.conf with the Scishion one ”

Re-flash with BEELINK MINI M8S II rv106 firmware is a great option But the remote of the V88 pro isnt working !

I have the following problem with this V88 Pro. When I try to start it it shows “Android is updating, optimizing apps….” and it remaining like this forever.

Any idea how it can be repaired?

Do you know if USB OTG is supported on this or other Android boxes? The use case is receiving and displaying video streaming from an external USB cam.

Is this a HW USB 5 pin vs 4pin issue or an OS version issue?

Will you still need a USB OTG external cable?

@Jean-Luc Aufranc (CNXSoft) Reading wiki on OTG below: https://en.m.wikipedia.org/wiki/USB_On-The-Go 1. I get the impression that an Android TV Box should have host USB ( A) ports just as PC/laptops do. Thus should be able to receive/display USB cam video streaming with an appropriate Android app like CameraFi? These OTG cable and OTG micro USB features seem to arise from ( Android) phones and tablets initially having just micro USB slave ( B) ports, until there was demand for phone USB host function to control peripheral devices. What do you think? 2. Is there a way, as opposed to CameraFi types… Read more »

@Athar
UVC USB webcams work in Android as long as the drivers are there, and usually they are.
TV boxes USB ports are just like PC USB ports, except for one that’s can also be used as OTG, mostly for firmware update/debugging.

Motion, VLC, mjpg-streamer could work in Android if they have been ported to the OS.

Thanks. Looks like there are motion and mjpg-streamer like Android apps and of course VLC is supported too.

Then there are GNURoot like Android apps that can give you CLI, or even GUI, access to various Linux distros that then allow you to run Linux apps alongside Android ones.

Nowadays this is $32 on gearbest, $27 on chinavasion. What went wrong with China? Are they waiting for Trump’s ban and try to raise as much money as possible before that? They’d better do that with wholesale prices and volumes, as usual.

And until a few hours ago, was on sale for $24 on Banggood, but price has gone up to $35. However you might find some online ad to take you to the sale price.

It’s ending weekend hours of Chinese New Year holiday, so prices could have gone up temporarily.

@azbesthu
Hi, how do you install this rom? and how do you get the remote working please any help appreciated.

I’m not an expert so some basic steps please