When Link Card evaluated processors for a Linux audio IoT board, they considered candidates like Allwinner H3 and Ralink RT5350, but eventually went with Atheros AR9331 due to cost, simplicity, features, and power consumption reasons for their Music802 board based on LC930 system-on-module. 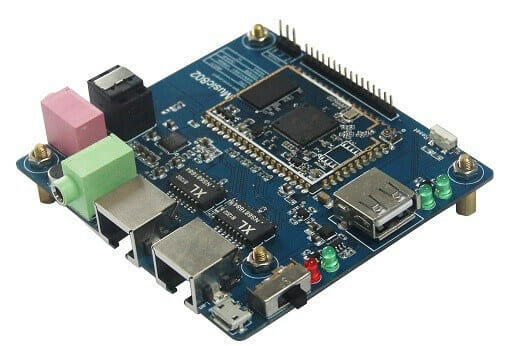 The board runs u-boot + OpenWrt, the company claims the project is open source, and promises to release source code and hardware files to backers. The latter is often promised on crowdfunding campaigns, but no always followed through. There’s a github account with u-boot code, but the OpenWrt repo is empty for now. 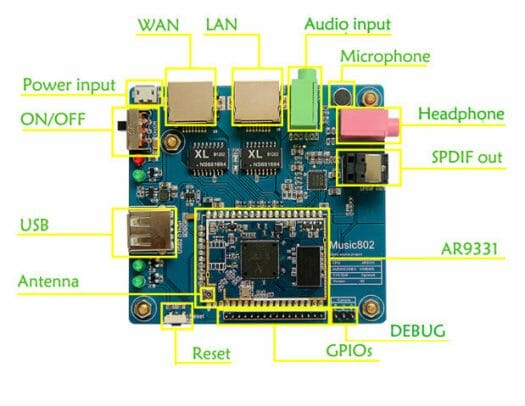 Music802 project has launched on Indiegogo (flexible campaign), and the company aims to raise $7,500. You’ll need to pledge $19 to get the board with an external antenna, and if you are interested in LC930 CPU module instead, there are rewards for the system-on-module starting at $40 for 5 LC930 modules. The board price is probably OK, but sadly the $25 to $35 shipping fee makes it completely unattractive. The first 50 boards would be shipped one week after the campaign, and other boards about 3 weeks later. Bear in mind that one reason for raising funds is to pass CE and FCC certifications, so I assume none of the Music802 boards will have it at that time. LC930 module is likely already certified since it was released in 2013, and you can find more details on the product page.

The Core board (LC930), looks a little bigger than the Onion Omega which is similar in functionality, no?

Also, these devices (ex. IB-MP401Air) seem to be geared for receiving/playing music, but I think the better target application is the small, low-power media server.

But can the Athereos AR9331 (OpenWRT) run Ampache or a headless Kodi?

@ben
if Ampache or headless Kodi does not included a GUI, i think it can be ported to Athereos AR9331 easily…

well this is another weird one, what exactly was the idea behind it, a router with audio ??

that wolfson WM8960 chip doesn’t look too bad but certainly not high end.
I never done audio with openwrt, no idea what would be the limitations of such a combo.

if it’s supposed to be a streaming client, i’ll stick with my rpi zero (or any other cheap arm “lite” board) and hifi dac module (that’s where you want to put your money), running volumio or some other “audio” system.

It’s often hard to find an alsa driver for AR9331 which is also compatible with WM8960 …
If someone has a source for it I’m interested !