Yotaphone popularized dual display smartphones with your standard color display on the front panel complemented with an always-on E-Ink display on the rear panel that consumes less power, and even shows the latest screen update (e.g. your plane ticket) when the battery is depleted. The latest model – Yotaphone 2 – was launched in 2014, but for whatever there has not been an update since,  and companies appear to be clearing their stock with for example GearBest selling it for $119.99 shipped. However, even if the company never produces a Yotaphone 3, other have reproduced the design with the latest being Hisense A2 samrtphone whose specs have recently been published on TENAA (China equivalent of the FCC). 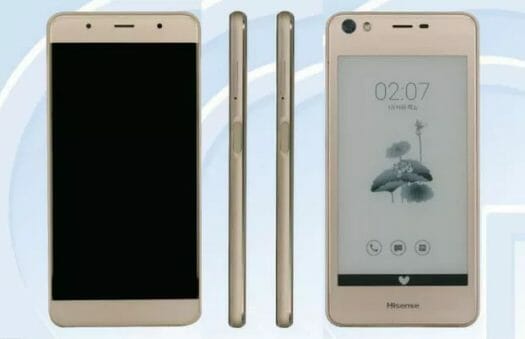 Preliminary specifications for Hisense A2 smartphone:

The phone runs Android 6.0.1 with some custom skins. Since it has passed TENAA certifications should be launched very soon in China.

…and of course you took the chance to help promote GB, even knowing that 39 phones will go out in minutes…
Great job!

@Jean-Luc Aufranc (CNXSoft)
I just checked, it’s back at $119.99. Unfortunately, no expandable storage is a let down. However, yes, the YotaPhone is one classy device!