Caterpillar is better for its construction machinery and equipment, but the company has also been making rugged smartphones, some of them strong enough to be run over by 4+ tons machines, for several years, and they’ve now unveiled Cat S60 smartphone powered by a Qualcomm Snapdragon 617 octa-core processor and including both a 13MP camera and a FLIR thermal camera on the back of the device. 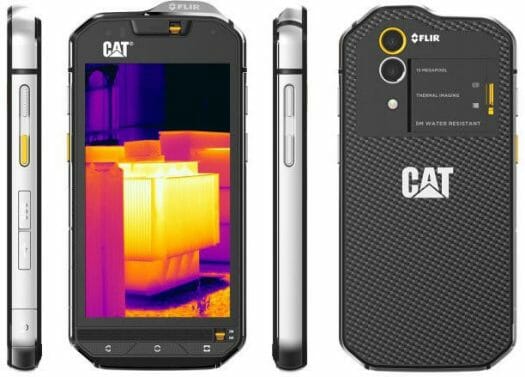 S60 will run Android 6.0 Marshmallow. Some use cases for the thermal camera include detecting heat loss around windows and doors, spotting moisture and missing insulation, identifying over-heating electrical appliances and circuitry, and seeing in the dark.

Cat S60 will be showcased at Mobile World Congress 2016 next week, and become available later this year for 649 Euros / $599 US. You can find some more details by reading the press release, and once it is updated, check out the product page.

In the same style, there is Crosscall http://crosscall.com/en/ . I don’t know about the pricing though. Some MTB video of rugged usage with Cedric Gracia in Andorra: https://www.youtube.com/watch?v=neiCi6Vjeyo

Wow! Since I am into full-featured phones with small screens (think Xperia Compact) I really like this.