Thanks to STMDuino32 community, there was already support for the Arduino IDE on board based on STMicro STM32 ARM Cortex-M micro-controllers, but  STMicroelectronics and Arduino Srl have introduced the STAR program to bring official support, and unveiled their first board with STAR OTTO Arduino board powered by STM32F469 Cortex M4 MCU at Maker Faire Bay Area 2016. 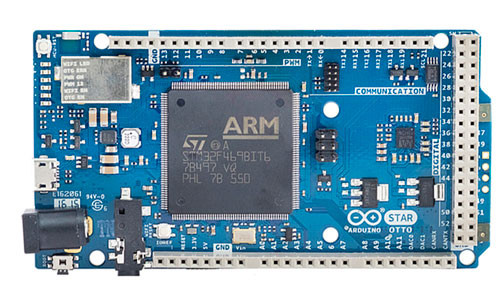 So that’s the third board in 2 weeks by Arduino S.r.l to feature Espressif ESP826, after Arduino UNO WiFi, and Arduino Primo. 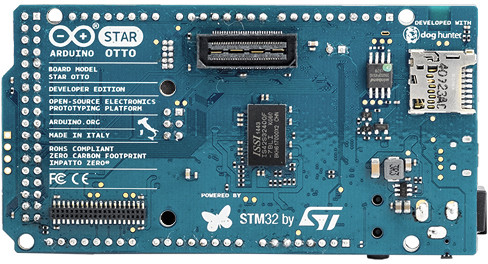 The board is also quite powerful, and the company will provide Arduino STAR LCD shield and an NFC shield for the board in Q2 2012, with a separate sensor shields planned for H2 2016. The board can be programmed via either the Arduino IDE or Arduino Studio online IDE (which I can find info on).

Pricing has not been disclosed, but for reference the MCU itself is about $10 per unit for 10k orders. More details can be found on Arduino.org or STmicro.com.

but wow,there are single connectors with the mis-spaced Arduino pin layout now? Would love to get the part number for that.

@JM
It will be open source hardware, so the BoM will be published in due time with the part number.

Terasic is better at it

@nimeq
Terasic does carry lots of logos but only has one processor (well, FPGA) to deal with and their boards are mostly around Altera so at least they have a product path that makes sense.

These boards on the other hand seem to be thrown together primarily to meet a marketing goal. Especially the previous one here the Primo, that was a ridiculous combo of μCs

Why is Arduino.org claiming that the ESP2866 has 8MB instruction RAM and 12 MB data RAM?

According to several sources the chip has a lot less, 64 KiB of instruction AND 96 KiB data

Is this a new marketing approach where 1 MB = 8 KB?

Yeah that’s definitely incorrect, but technically esp8266 can execute code from flash through a cache which can address up to 8mbit of flash memory.

@Jean-Luc Aufranc (CNXSoft)
How they say in Italy this is not a 9 months normal delivery but an equine delivery 13 months and hopefully it will not end in a abortion.
They are used to it.