SmartHomy Homy Player is a TV box running Android TV that includes an ATSC, DVB-T2/C,DVB-S2, or ISDB-T tuner, is said to be powerful enough to be used as a 3D gaming platform, and serves as a security system and home automation gateway using Z-Wave, Bluetooth, WiFi and IR blaster to control your things. 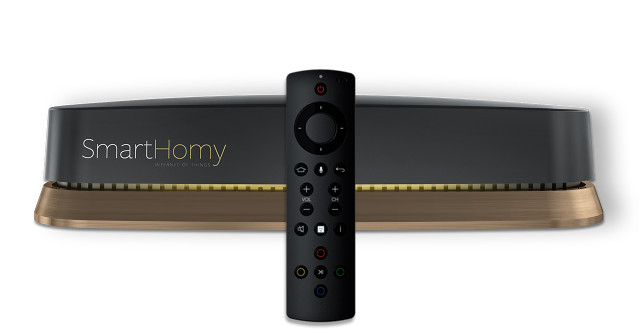 The device ships with Homy Remote, a backlit Bluetooth 4.0 LE remote control that includes gyroscope, and allows to control the player with voice commands. Smart Homy appears to mostly targets the US markets as seen in the comparison table with some home automation solution, media players. and game console.

It would have been a little more fair to include the non-pro version of NVIDIA Shield Android TV since the price without hard drive is also $199, and it still lacks home automation support and the tuners. While you can play games with Amlogic S912 SoC, the performance will be much lower than the NVIDIA box.

In order to maximize Z-Wave interoperability, Homy Player supports more than 50 command classes for Z-Wave devices, and the player/gateway also supports more than 70 Security Devices, including common security cameras. Configuration of home automation is allegedly simplified thanks to a “patent pending” Scene Recording System where you can easily record trigger and action using your physical devices.

SmartHomy has launched Homy Player on Indiegogo (flexible funding), where the company targets to raise $59,000 or more. A $199 pledge should get you Homy Player with the remote and an extra 64GB storage. Shipping adds $30, and delivery is scheduled for July 2017. You may also get more details on SmartHomy website.

“Smart Homy” – the names they come up with are hilarious.

Someone from the other side
Winston

@Winston
Homy Player is the name…SmartHomy is the company. An awesome Tv Box and very cool video.

They should be pitting themselves against Wetek Play 2, I believe.

Is it me or is that comparison table actually containing arbitrarily made-up bulletpoints?

Yes, you are right. These products can’t be compared. They are at a disadvantage compared with home player. Control4 is closer in features.

S905-H SoC – No 10-bit output. No Netflix HDR or YouTube HDR. I guess, it will appeal the home automation crowd who are looking for an AIO box.

@Morpheos
Yes, many people are looking for such devices, at least based on the comments I get on K1 Plus T2 S2 review. Streaming is not always working very well.

I think sometimes people see the specs and straight away compare that with a similar spec’d device purchased direct from China – completely omitting the costs involved in software development and the features that development adds. From the details in their campaign, it looks like those development costs will be high. So the product is probably worth the price tag they slap on it. The problem is (and this is just my opinion here), I think this product has a very targeted market and I don’t think Kickstarter/Indegogo are the place to raise funds for products with such niche target… Read more »

From what I have read on Amercan cord cutting sites, the appeal of TV tuners is free to air channels without cable subscription charges.

I think this is a very cool device to start with the “Internet of Things” without invest in additional hardware. I can use it as a normal TV Box and watch Netflix in 4K thanks to DRM licenses included…. and one day I can connect my door lock or my WIFI cameras. Their Scene Recording system is that I need for my parents, very easy! No more phone calls from my parents to automate their home.

@Daniel
Control4 is awfully expensive (I’m talking about Europe) and afaik they only support Zigbee protocol and also works only with their own hardware (at least it was the case when I was testing it cpl years ago). Also theres some weird licensing model. By that I mean when your project is done, its basically it, you can’t modify it by yourself unless you’re their distributor and/or have license for their (idk what’s software name)… So, I give thumbs down for Control4 🙂

Looks very luxurious and powerful, the video voice over is stunning

@Morpheos I believe that is a substantial market for a decent box with *unified* streaming and TV Tuner — but WeTek is doing everything possible to kill it. WeTek hardware may be OK but their software is atrocious — pre-beta quality in my opinion. I have a Play 2 with ATSC tuner that I would like to sell on eBay but I am reluctant to foist the issues onto an unsuspecting buyer. About 20 channels are broadcast for free in my area. I would gladly pay for a *working* box with one remote to access these channels plus streaming at… Read more »

@Daniel
You want your security connected to game & video box? Maybe a dedicated security box could be secure while connected to internet, but not and arbitrary collection of softwares running in box with security apps too.
Or you could just never lock your doors, never PWD your files.

@Eric
Android can run programs (games) and services. Security and home automation are services, not apps, same as the email. Services can run even if the UI is frozen.

Homy Player makes the ShieldTV look like a cheap box. As TV Box a bit expensive but with entry-level price as a decent home controller. Very cool the z-wave scene recording feature.

Rare model. I like the remote for casual gaming

The $200 – 2017 nVIDIA Shield running Android Nougat with inbound DVR + Tuner support plus Google’s, always listening (Voice) Assist onboard will likely slaughter all the rest once it matures. Particularly at its price point. With the Shield running a ARMv8 ARM Cortex-A57 quad-core + ARM Cortex-A53 quad-core (64-bit) CPU & a 1000MHz 256:16:16 Core Maxwell GPU, this AMLogic S905 equipped Homy Player looks handicapped even before it gets out of the gate. I know for a fact that AMLogic’s version of Android Marshmallow running on a similar 2GB AMLogic S905X Android TV – Xiaomi Mi Box needs a… Read more »

Mr Netflixer : The $200 – 2017 nVIDIA Shield running Android Nougat with inbound DVR + Tuner support plus Google’s, always listening (Voice) Assist onboard will likely slaughter all the rest once it matures. Particularly at its price point. With the Shield running a ARMv8 ARM Cortex-A57 quad-core + ARM Cortex-A53 quad-core (64-bit) CPU & a 1000MHz 256:16:16 Core Maxwell GPU, this AMLogic S905 equipped Homy Player looks handicapped even before it gets out of the gate. I know for a fact that AMLogic’s version of Android Marshmallow running on a similar 2GB AMLogic S905X Android TV – Xiaomi Mi… Read more »