Cloud Media (Syabas) is better known for their Linux based “Popcorn Hour” media players, and last year I reviewed their FreeOTT streaming media player powered by a Cavium ARM11 processor. The company is now entering the home automation market with the STACK Box (aka XuanBox) also powered by a Cavium ARM11 processor, and supporting various connectivity options to interface with popular smart “things” such as Belkin Wemo and Philips Hue, as well as a Raspberry Pi Bus (26-pin header) to support add-ons. 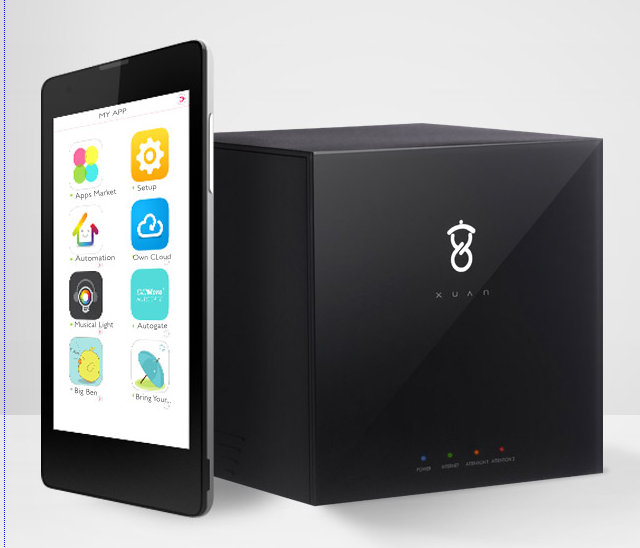 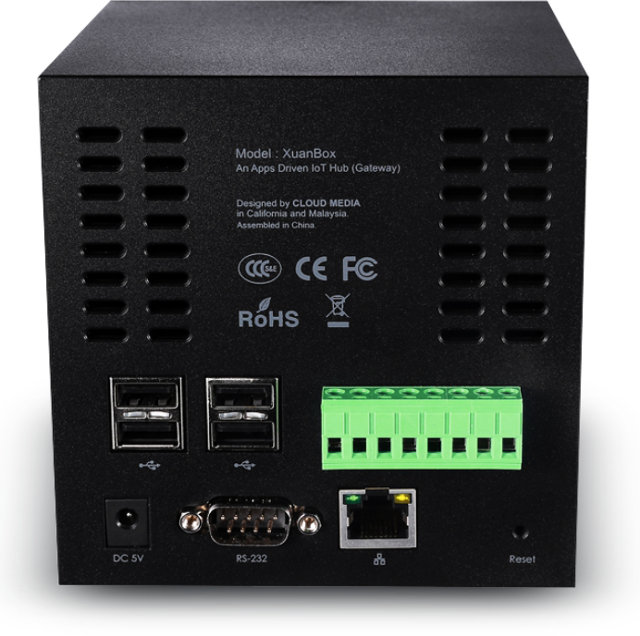 The STACK Box runs an embedded Linux based on kernel 3.10, and supports smart lighting, energy, audio, video, security, healthcare and wearable devices such as Sony and Sonos WiFi speakers, Belkin Wemo smart devices, Foscam IP Camera, Yale, Kwikset, Schlage locks, Philips Hue and GE/Intermatic/Aeon Labs /Leviton Z-Wave devices. You can check if your device(s) is/are currently supported here. The box is meant to be opened since you can insert a XBee module or a Raspberry Pi add-on board inside.

Everything is controlled via an Android or iOS smartphone app, but plans have been made for Windows 8 and web browser support. The app will allow to register new devices (Setup), and add “IF this THEN that” rules. It will also include an App market with apps such as ownCloud, Spotify, Energy Genius, Security and monitoring, Musical Light,… It also supports social media (Twitter, Weibo..), various network services (DLNA, uPnP, remote access..), and more services including Facebook, Thread, and IFFT are in the pipe. 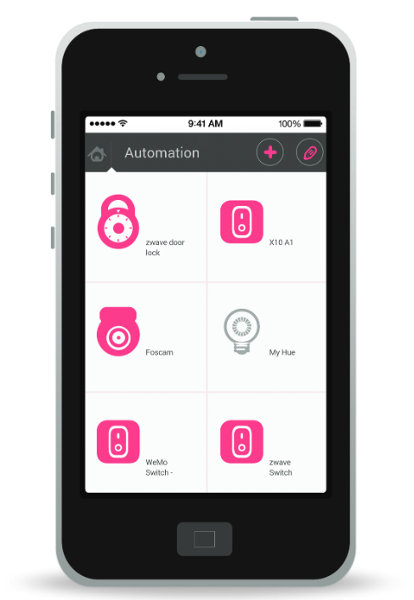 Since there’s an AppStore, you’d expect some developers’ resources, tools. and API in order to design and publish third party apps, and you’ll the XUAN SDK, guidelines, documentation, API, and a developers (& users) forum at http://developer.thexuan.com. Programming can be done with HTML5/JavaScript for mobile app, as well as Python programming language for background tasks.

The company is now looking for funds ($65,000 or more) to complete development and mass produce the STACK Box via a Kickstarter campaign. An early bird pledge of $79 will get your a black STACK Box including Bluetooth LE and Z-Wave connectivity. Once all early bird perks are gone, the box will go for $99 in Kickstarter, and is expect to retail for $149. They also have other pledges for more expensive boxes with different colors, but the same functionality, and bundle with Popcorn Hour A-410 media player for $329. Shipping is free to the US, and $20 to the rest of the world. Delivery of the perks is scheduled for December 2014, but since they have quite lot of work to integrate all promised standards, and for interoperability with smart devices, their road-map currently extends until July 2015 in order to implement all the “coming soon” features mentioned in this post. The complete roadmap is available at the end of XUAN brochure, and you may want to visit thexuan.com for more details.