Omron Project Zero BP6000 blood pressure monitor & smartwatch / fitness tracker was unveiled at CES 2016. The device was due to be released at the end of 2016 pending FDA approval, but the launch has now been delayed to spring 2017, and it will be sold under the name “HEARTVUE”. The company has however showcased a new version at CES 2017, for now just called Omron Project Zero 2.0 that has the same functions but is more compact and lightweight.

The watch will also work with Omron Connect US mobile app, and can record accurate blood pressure, as well as the usual data you’d get from fitness trackers including activity (e.g. steps) and sleep, as well as smartphone notifications. Blood pressure measurement can be activated by the user by pressing a button and raising his/her wrist to the height of the chest. The goal is the same as the first generation watch: to make people who need it measure their blood pressure in a more convenient fashion. The second generation device looks much more like a standard wristwatch as the company reduced the size of the inflatable cuff. 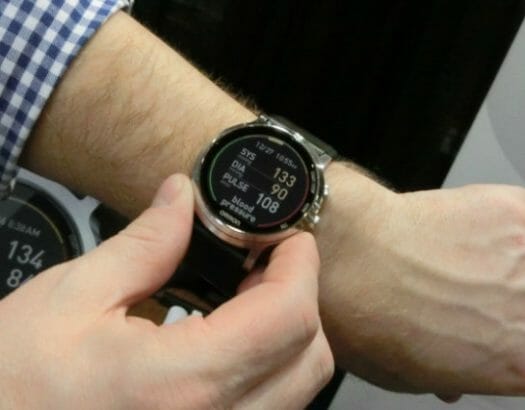 The new model will also have to go through FDA approval, a time consuming process, and Omron Healthcare intends to release the device in 2018 for around $300. More details about the new model may eventually show up on the company’s Generation Zero page.

Where can I purchas the 2.0 watch?

Omron wearable blood pressure monitor is now up for pre-order for $500.
https://www.cnx-software.com/2018/12/21/omron-heartguide-wearable-blood-pressure-monitor-bp8000-m/

@Mary Ellen Cunius
You can’t even buy the first version yet. The version 2.0 will available sometimes in 2018, maybe in 2019 if there are delays with FDA approvals.

How much the Omron project zero 2.0 in Philippine currency

You will never be able to purchase the BP6000, the Heartvue. Omron did an about face and will not be releasing it to the public. After following and waiting for the release Omron has really disappointed a lot of people that had shown interest in this product.

I saw similar .. but product made in China !

So now it looks like the version 2.0 smartwatch will be sold as Omron HeartGuide later this year. No price yet.